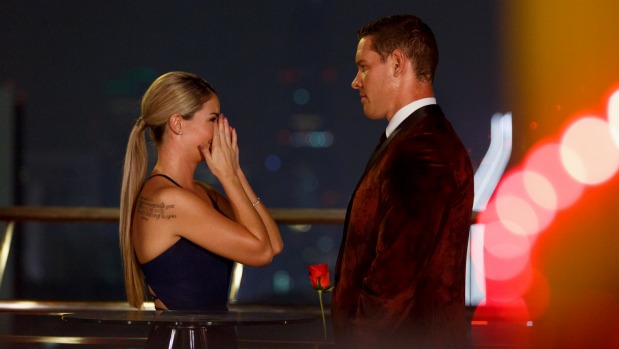 Bachelorette Bel Clarke said she regrets not leaving when she had the chance.

The 25 year-old shocked bachelor Zac Franich on Sunday night when she confessed she didn’t know if she could stay.

Franich talked Clarke around only to let her go the very next day in a surprise elimination.

“I usually don’t have any regrets in life but probably one thing I regret is not leaving that night,” said Clarke.

“I was talking to him and I saw the door and I should have gone but it wasn’t planned.”

Clarke and fellow bachelorette Claudia were sent on a group date only to arrive and find out one would be sent home.

“It was shocking, I thought we were going on this great date… I didn’t realise I would be packing my bags to go home,” said Clarke.

Clarke was not the only girl to be sent home last episode as 26 year-old Vanessa Bingham from Christchurch was also sent packing.

Bingham was one of the three intruders and said she was happy to have come in half way through.

“I think it was nice skipping all the first bits and going straight to Thailand,” said Bingham.

However both the Bingham and Clarke felt neither of them had enough time with the bachelor to form a real connection.

Clarke was vocal on both the show and in the interview about Zac favouring girls at the cocktail parties.

“I think maybe he could have chosen to take some other girls away to spend some time with,” said Clarke.

“Obviously if you like someone you want to spend time with them but he had so many other girls there so it would have been nice if he could have given us a bit more of a chance,”

Both girls confessed they felt they had to drive the conversation when they spoke with the bachelor.

Bingham said she did not get enough from Franich to match her talkative personality.

Clarke agreed and said she felt Franich wanted the girls to chase after him and make all the effort.

The cat-lover maintained that she did talk about other things apart from her feline friends.

“I did talk about more than just cats which wasn’t shown but they just seemed to only show the cat stuff,” said Clarke.

Despite their issues, the pair both agreed that Zac was still a nice, genuine guy who they felt a connection with.

“I think my favourite thing about Zac was his personality – supportive, caring and understanding,” said Bingham.

“My favourite thing about him was his smile, he had a really nice smile,” said Clarke.

The duo also agreed on who they thought would win Franich’s heart.

“I think Sarah will win, she is such a sweetheart and she just seems to be so content with her life,” said Clarke

“I want Sarah to win but I’m not sure if she will,” said Bingham.

“I think she is a little bit more further on in life than Zac but I think probably Claudia or Viarni might win. Maybe more Viarni,” concluded Bingham.