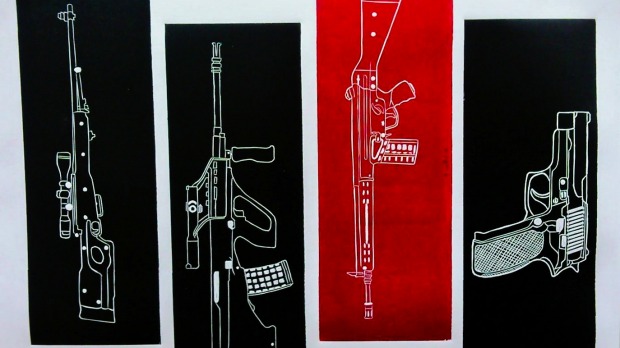 The art of war has come to the heart of the capital, right on time for Anzac Day 2017.

That journey reflected in the works of the exhibition, is a progression the trio describe as one of transition and isolation, determination and hope.

They’d know; all three artists are veterans themselves, two are career soldiers. They’ve experienced the struggle to rejoin society firsthand.

Asking Wilson what level of violence he has seen, the response is simply, “You have no idea, mate.”

“Timor was a particularly nasty conflict, very brutalised,” he said. “You can use art as a tool. Art for me over the last couple of years has been about getting those feelings out.”

Art with themes of war is not likely what first comes to mind when one considers decorating their home or adding to an art collection.

“The type of subject is maybe not for everyone, it’s not something that necessarily a lot of people want to live with,” said Ben Plumbly, director of art at Art+Object, Auckland.

Not for everyone, how strangely sad.

Despite our desire to sweep conflict under the carpet, war has been and remains a fact of human culture.

In some areas of the world, it affects everyone. It certainly affects our veterans.

Gauldie, a career artist who served as the New Zealand army artist from 2004 to 2015, found experiencing conflict zones changed his outlook forever.

“Make art not war, sure but it’s not realistic,” said Gauldie. “It’s idealistic, it’s a lovely utopian theory but there’s good people and bad people out there.”

So why consume the art of war? Why have it our homes?

One reason could be because without it, people like our veterans and the victims of war, remain invisible.

“It’s not an uplifting subject for a lot of people but there are many collectors out there who collect war related material incredibly passionately,” said Plumbly. “I think there’s war works with great optimism and great hope in them.”

Plumbly agrees that in our world, art with uncomfortable themes like conflict has “a really strong part to play, and increasingly contemporary art engages those themes.”

Plumbly’s expert perspective is that war artwork holds the greatest appeal to a collector “who is prepared to be challenged.”

“If you want an artwork that is going to provoke a response, going to engage with contemporary issues, then chances are you’re going to be looking at something that is not all roses and sunsets,” he said.

Whatever your feeling is on the topic, it’s certainly “a personal thing.”

“I think it’s a really good way to highlight issues that people don’t normally talk about and expose people to the other side of stuff that isn’t normally seen in times of conflict,” said Mills.

A driving factor behind the trio’s exhibition, is to raise funds for the those experiencing that other side.

Wilson and Mills run No Duff, a volunteer-based veteran’s charity named for the call over the radio when soldiers are in real danger.

Founding this organisation has seen them do everything from locating lost men living rough, to helping others find addiction support, or acquire much-needed assistance for a veteran’s disabled child.

They hope that bringing the issues facing veterans into the open will encourage others in need of help to reach out to the team at No Duff.

“There’s a lot them that need help and sometimes they’re a bit too scared to approach,” said Mills, “So it’s a really good way to let them know that. ‘Yeah man, it’s okay to ask for help.’

On the reverse side of Wilson’s sculpture in the exhibition entitled Self Portrait is inscribed a message which rings true for all three artists, ‘You will find the answers in the faces of the oppressed.’

Being able to make art and “serve” their fellow veterans has helped all three men to find their own peace and balance.

“It’s a way I can serve the country and do art,” said Gauldie. “It’s got a higher purpose and a little bit of meaning beyond myself.”

The exhibition is open to the public from April 20 to May 20 at Bowen house, Parliament House, Wellington.