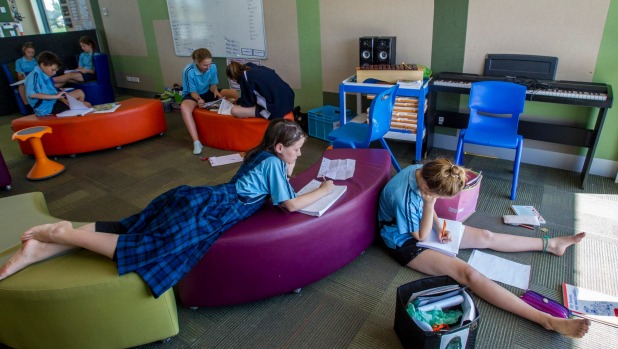 Open-plan classrooms are popping up nationwide but teachers often struggle to adjust to a new way of working. What’s the benefit of modern learning environments? Adele Redmond reports.

If there’s a pot of gold at the end of the collaborative teaching rainbow, Dave* thinks it’s a small one.

He’s struggled with 50-child classrooms at his Christchurch primary school over the past few years and says he’s not the only one, with at least half his colleagues exhausted by what’s supposed to be the future of education.

Endless collaboration between teachers sharing the spaces has distracted them from teaching pupils, who are in turn distracted by each other. Learning outcomes have gone down, not up, but no one wants to discuss the elephant in the room, he says.

“You don’t want people to think you have a problem with your teaching partner and you don’t want to become the object of everyone trying to fix you.

“The standard answer will be that you need to upskill but skill isn’t the issue; the issue is a new system has been introduced and they haven’t thought about what they’re going to lose.”

The Ministry of Education has already spent hundreds of millions in its shift towards modern learning environments (MLEs) and the 50 to 300-person open-plan classrooms that characterise them.

Its aim of improving heating, lighting and digital technology in 115 Christchurch schools over the next 10 years aligns with international research that says healthy, comfortable classrooms help promote learning.

Open-plan classrooms, or flexible learning spaces, have been pursued through the Canterbury schools rebuild programme because it is thought they allow teachers to work in more innovative ways than single-cell classrooms.

However, the ministry’s own research makes clear simply changing the shape of buildings alone will not lead to better education.

A paper from the New Zealand Council for Educational Research says teachers struggle to let students learn through failure in MLEs, while Melbourne Education Research Institute director John Hattie wrote that, without investment in teachers, open classrooms are “missed opportunities” at best.

Although flexible spaces can facilitate more student-led learning than traditional classrooms, “it is not the space that determines purposeful and focused relationships between teachers and their students”.

“Strong relationships with students are the core of good teaching and can form in any space.”

Teacher training had always focused on technique over curriculum. Now techniques for dealing with 90-child classrooms were needed to avoid replicating the failed open classrooms of the 1970s.

“The fact that we have self-managed schools and a bicultural frame and inclusive schooling; trying to put all those pieces together, trying to fit them into ideas about more collaborative space is quite exciting and challenging,” Fickel says.

“I worry sometimes that the policy has been changed and people think it [teaching practice] is going to change overnight. This is actually a cultural change for all of us.”

Wellington’s Island Bay School has modified its classrooms off it own back, former principal Perry Rush says.

He left the school at the end of March, but was there to see walls knocked down to enable collaborative teaching.

Moving into an MLE required teachers to shift their way of working, and meant they had to relearn how to go about being effective in their teaching, in collaboration with teaching partners.

“Often times when you hear teachers say it’s not really working, what you’re really hearing is ‘the way I used to teach isn’t able to be effective in this new environment’.”

It is not so much about the environment being inappropriate, Rush says, but the lack of professional learning for teachers.

“Where is the funding and support from the ministry for schools and teachers?”

There was always going to be an implementation dip, or a struggle zone, he says, but schools need to look at the issues and figure out how to solve them.

At Churton Park’s Amesbury School, a modern school made up of flexible learning spaces, principal Lesley Murrihy says they have learnt that to teach effectively in the modern spaces, teachers need to have a progressive approach, and combine it with traditional knowledge.

It was a matter of finding how to mesh the two together in the best interest of students.

That created a need for “massive” teacher development, Murrihy says. The challenges teachers faced in meeting the needs of 21st century students applied to both modern and traditional teaching spaces.

High school teacher Tom* says putting “a beanbag in a room and a light up at a jaunty angle” is not enough to change teachers’ relationships with students and other staff.

Working in an MLE lets him focus on students who need more help but, as one of few teachers at his school experienced with those spaces, he knows his colleagues are only starting the “few years of really hard work” needed to adopt a student-led teaching style.

“For the first few weeks or months it’s like trying to teach in a different language.”

Students who want to avoid a particular teacher have the freedom to do so in an MLE, but teachers, used to being “the king of their own classrooms”, must manage personal and professional differences during the often-stressful transition to collaborative teaching.

“As people, we’re not used to being observed all the time. We have to be vulnerable because people see you on your bad days and your good days. There’s not a lot of room to be proud in this environment.

“If you have got a culture where you’re not discussing it, you’re going to implode.”

Tom says school boards often filled a gap in knowledge about collaborative teaching methods as the Government’s commitment to MLEs was “at an architectural level, I have found”.

Schools should not have to ask, says Halswell School principal Bruce Topham.

His school had “limited warning” it would be among the first MLEs in Canterbury and immediately embarked upon a “custom” training programme.

“I don’t think all schools have had that opportunity, which is a crying shame. If they’re not doing what we did or something similar it’s going to be a challenge.”

MLEs offer teachers more flexibility and opportunities but there is also “more potential for people to suck it up and not see how much stress they’re under”, Topham says.

He will relieve for teachers struggling with the significantly higher workload of adopting modern learning practices.

“We know that it’s there and as leaders we would like to do more but we’re restricted by our budgets.”

Businesses like CORE Education provide professional development programmes in MLE schools battling the pull of traditional teaching methods, consultant Derek Wenmoth says. He has run ministry-funded and private workshops for schools transitioning to MLEs for the past six years.

Teachers had “pretty bad experiences” when MLEs were established without professional guidance but most worked through their teething issues.

“That’s part of the litmus test of any change,” Wenmoth says. “Nobody likes to change and change is only effected once we see a compelling reason.”

In his 2015 sabbatical report he found there was “no consistent evidence that the use of open learning spaces makes any positive difference to student achievement”, particularly at secondary school.

Staff who defended traditional practices were quickly made to feel “out of touch or an obstacle to school improvement” and even when parents withdrew their children from MLE schools, those schools did not question the validity of the changes, Wilson said.

He wrote that John Hattie confirmed “what most of us know, that the quality of the teacher makes the greatest difference” to a child’s education.

So what are we spending $1.3 billion on classrooms for? Hattie has an idea.

“Governments love infrastructure – and especially love to build new buildings,” he wrote in a report used by the ministry to explain the move towards MLEs.

“They can see the effects of their largesse, they can open them with fanfare, and the buildings can be named after someone important.

“New buildings are particularly promoted when they are different: lots of glass, no walls or doors, for example.”

* Names have been changed.