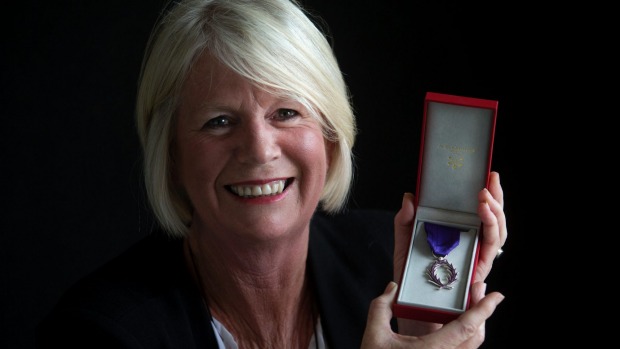 When Glenda Palmer moved to France in 1978, she didn’t know a word of French.

Fast-forward 39 years and the school teacher has just been awarded a prestigious medal by the French ambassador to New Zealand for her work improving the access Kiwi students have to the French language.

This week, Palmer, who teaches at Coastal Taranaki School, was presented with the insignia of the Chevalier de Palmes Academiques, a national order of France for distinguished academics and figures in the world of culture and education.

Originally founded in 1808 by Emperor Napoleon as a decoration to honour eminent members of the University of Paris, it was changed into its current form as an Order in October 1955.

After she studied as a physical education teacher in 1977, Palmer moved to France when her husband landed a rugby contract with Rugby Club Nimois.

“That’s where the language came from and I continued that with my teaching when I came back,” she said.

Before she moved to Europe, she couldn’t speak the language she would later teach.

“Not a word and that was so embarrassing but I learned, and within four months I became proficient enough to become a tennis coach for six years,” she said.

“Being a physical education teacher and a tennis player I just fitted into that role no problem.”

She continued to teach the French language after she returned to New Zealand in 1984 and in 2010, she won a scholarship for a one-year total language immersion programme at the Centre for Applied Linguistics in Besancon.

​In 2012 she was shoulder-tapped to apply for the role of National Advisor for French to the Ministry of Education, a position she held for four and half years.

“It’s fine learning a language but the idea is to able to use the language, so we want to turn language learners into language users, that’s been my goal over the last five years,” she said.

In her speech to present the medal to Palmer, French ambassador Florence Jeanblanc-Risler thanked her for the work she had done to promote the French language in New Zealand.

“I would like to thank you fo being a passionate and innovative teacher who has done so much to inspire others, but I would also like to stress the remarkable work you have accomplished as an education professional to support and improve the teaching of French in New Zealand, particularly in collaboration with our embassy,” she said.

“You have truly been one of those bridges on which we rely to develop our friendship and cooperation.”