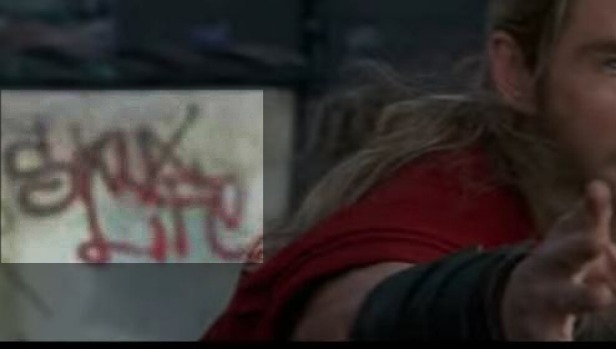 Did Ricky Baker go to space?

Director Taika Waititi has snuck a cheeky nod to Hunt for the Wilderpeople into Thor: Ragnarok.

A close watch of the new trailer for the Marvel blockbuster, which Waititi is directing, shows some graffiti on a wall behind Thor in one shot.

The scene is a serious one – Thor is fighting the Asgardian goddess of death, Hela, when she crushes his supposedly indestructible hammer Mjolnir.

But a shot of Thor throwing the hammer reveals some red graffiti on the wall behind him. The phrase will be familiar to those who have seen Waititi’s previous film, Hunt for the Wilderpeople: “Skux Life”.

The easter egg seems a nod to Kiwi audiences in particular, who flocked to see Wilderpeople in such numbers it became our highest-grossing local film ever.

The Easter egg was discovered by Vanity Fair writer Joanna Robinson, who posted a picture of the grafitti on Tuesday morning.

“If you’re surprised by how funny the THOR trailer is I guess you’ve not seen a Taika Waititi film,” Robinson posted.