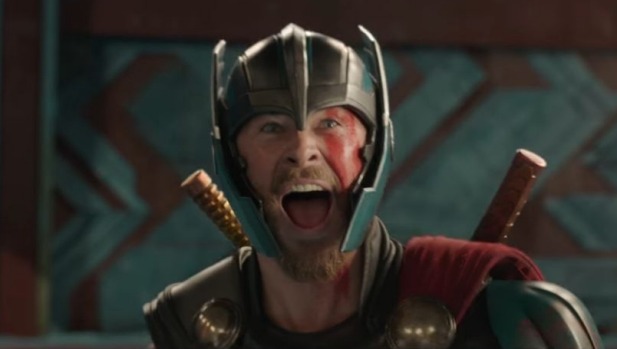 The trailer for the latest Thor film has smashed through Disney’s records, making it the entertainment powerhouse’s most popular trailer ever.

According to The Hollywood Reporter, the 1:48 minute clip garnered a record-breaking 136 million views in just 24 hours, trouncing its closest competitor, The Beauty and The Beast, which had 127.6 million views in 24 hours.

It narrowly missed out on the title of most watched ever, however. That honour goes to the incredibly creepy reboot of Stephen King’s It.

That skin crawler was viewed 197 million times on March 29. A distant second is the upcoming Fate of the Furious, which was revved up 139 million times.

“Ragnawrecking the records”, he posted.

Hours after the clip was released, an eagle-eyed journalist from Vanity Fair noticed an Easter egg (a Hollywood term for a hidden sign) hidden in the trailer referencing Taika’s other record breaking cinematic achievement – The Hunt For the Wilderpeople.

In the background of one shot, graffiti on the wall says “skux life”, the catchphrase of Wilderpeople’s central character, Ricky Baker.

Critics have said the trailer shows Waititi breathing some fresh air into a faltering franchise that has struggled to find the larger audiences of its sibling Marvel franchises, Captain America, Iron Man and The Avengers.

One key scene in the trailer shows an alien society pitting Thor against his fellow Avenger, The Incredible Hulk, gladiator style.

“Yes!” Thor cheers when he sees the Hulk for the first time. “I know him! He’s a friend from work!”