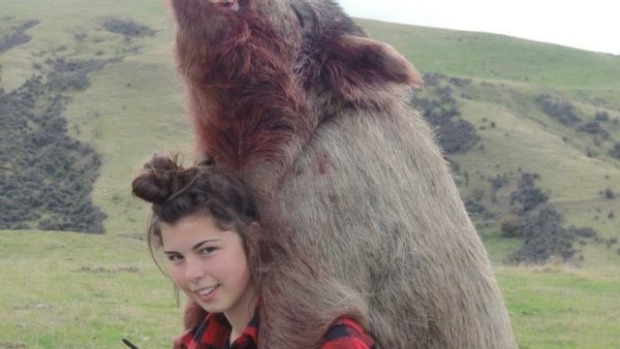 McClintock family, if you are reading this right now it might come as news to you that your 19-year-old daughter and granddaughter has been stranded in the Nicaraguan jungle as part of a television show.

Louisa McClintock, a fulltime farmer at 17, was part of a cast of 16 who have been roughing it in Nicaragua for up to 40 days.

McClintock left Christchurch Girls’ High School after getting NCEA Level 2 so she could live and work alongside her grandfather, Graham McClintock. They don’t use the internet, have no computer and like to do things the old fashioned way, she said.

The teenager doesn’t party, doesn’t drink (instead of drinking, McClintock hunts), and says living in a boarding house was like “being sent to prison”. So going on the first season of Survivor NZ seemed like a pretty good idea, she says.

READ MORE:
* Ex-army survivalist without fear about being on Survivor NZ
* First Survivor contestants named
* How does Survivor NZ compare to other countries?

“We do overnight camping out the back, light up a fire, eat what we’ve pretty much just killed. We’ve got cattle and sheep so we just eat our own,” she says.

McClintock, her grand father, and their colleague Joe, live a few kilometres up from the North Canterbury town of Cheviot where they farm beef and sheep on a farm in the hills. They’re a tight group, the three of them, she says. Everyone pitches in on everything.

That includes repairs to the books – literally – there’s no computer on the farm.

But McClintock didn’t tell them when she left the farm for Nicaragua. She and the other contestants were bound to secrecy. In fact, McClintock says this article will most likely break the news to most of her family.

On her return, McClintock says few questions were asked: “It was really great, no one asked any. They thought I was having the time of my life.”

Producers of Survivor NZ confirmed nothing was exaggerated for the camera. The contestants had to hunt or forage for food, which shouldn’t be too much of a challenge for a few of the competitors.

Former army sergeant Tony Deane, 55, and a few other hunters were sent to the jungle as well. Deane says he was well prepared for the physical and mental survival aspect of the show, but the social side could be tricker.

Also announced on Thursday, as part of the last of four cast announcements from TVNZ, was youth expedition leader Avi, 32 from Wellington, and Christchurch zookeeper Shannon, 24.

Nate, a 45-year-old police sergeant from Dannevirke, was announced as the final Survivor NZ contestant for season one.

Deane and Auckland mother Barb were the only contestants aged over 50 to be selected for the show. Asked why she wanted to go on the show, Barb responded: “let’s call it a midlife crisis”.

A Christchurch contestant, Matai’a Salatielu (Sala) Tiatia, 40, said people had been asking him how he’d lost so much weight after he got back from the show. Tiatia worked in alternative education at a school to help “at risk” kids.

Survivor NZ producers had earlier touted Tiatia as “a hugger”. Apparently, they had to warn him off hugging all the crew early on due to fears the other contestants may think there was some favouritism at play.

“A lot of my young people still don’t understand that aspect of aroha, they themselves are growing up in broken homes or in a gang affiliated community or surrounded by drugs and alcohol,” he said.

He greeted everyone with a hug, he said.

Survivor NZ premieres May 7 on TVNZ 2 at 7pm.