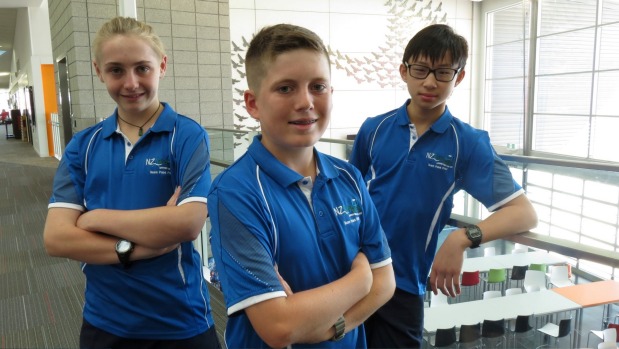 Aquabots are go for a trio of West Auckland school students getting ready to head to America to participate in an underwater robotics competition.

Their prize? A chance to compete at the National SeaPerch Challenge in the United States.

Since February they’ve been working hard – building a new robot and training weekly at the Whenuapai Air Base under the guidance of members of the Royal New Zealand Air Force (RNZAF).

The competition’s underwater tasks are driving their aquabot through a hoop obstacle course and putting rings and cubes onto poles on an underwater platform.

They also need to produce a handwritten engineering notebook, which includes their designs.

Darroch, 13, said one of the challenges was making a new robot for the competition, which has a motor-powered plastic hook to pick up items instead of the wire hook they used last time.

“We had to learn about circuits as we created a new design and new attachment for the America [competition], which involves a lot of circuits and 3D printed parts.”

Corporeal Tom Goodman, an avionics technician at the air base, said air force staff had also helped out with some electronics theory, teaching the students how to fault-find circuits and demonstrating the workings of limit switch.

All the pool training has been on a practice robot, built using parts donated from a local plumbing firm.

The competition robot, however, will be built using the kit supplied by SeaPerch.

The team, known as Point PHD (Padraig, Harrison and Darroch), have been fundraising for their trip, including doing a quiz night and letting people have a go on the aquabot at the Hobsonville Point Farmers Market.

They have also each received a Talented School Students Travel Award administered by the Royal Society of New Zealand, funded by the Ministry of Business, Innovation & Development (MBIE).

Darroch said working with the air force team had been “fantastic”.

“The people here are just amazing, really helpful, and they’ve got a lot of knowledge they like to share with us.”

Padraig, 13, said one of the best things about the process had been “how we get to represent the country, and the experience we’ve had, the achievement”.

Harrison, 12, said he was a little nervous at the idea of competing against a lot of other teams but “very excited about going to America”.

Point PHD will also be fundraising at Domino’s Hobsonville on May 4 from 4pm-8pm, where $1 from every pizza sold will go towards supporting the team.

The 2017 National SeaPerch Challenge in Atlanta, Georgia is from May 19-20.

For more visit the team’s Facebook page or check out their Givealitte page ‘Road To The USA’ to donate.