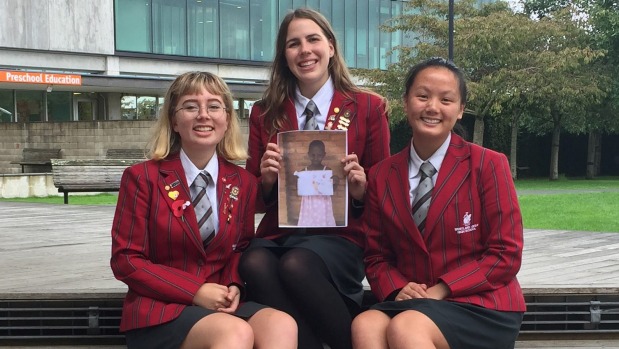 A young girl is living her life in Rwanda. Thousands of kilometres away, one Auckland school is working to make that life better.

Kasey Lui, Rhiana Merota and Izzy Sheild are students at Westlake Girls High School on the North Shore and the trio started a non-profit organisation a year ago this month.

Sending Smiles started following a conference focused on empowering women and making change, where the group was asked to focus on something they were passionate about.

“We all decided we wanted to focus on child poverty and we wanted to make the change on a wider scale and impact someone’s life,” Izzy said.

The conference was at the end of April 2016 and the trio began sponsoring a Rwandan 9-year-old named Ruth, in September. Their goal is for the school to collectively sponsor the World Vision child.

Izzy said, if every student donated just one dollar, there would be enough to sponsor Ruth for four years.

“It put everything into perspective for me. It’s an opportunity to help someone. Why wouldn’t you,” Izzy asked.

The trio regularly holds fundraisers, such as bake sales, to raise money for the sponsorship. This year, they set up a committee comprising students at each year level, in the hope the sponsorship could continue even after the year 12 students have left school.

Izzy said it was almost impossible to choose one child to sponsor.

“How can you choose? Everyone is so deserving and there are so many on the World Vision website.”

“To us, it’s not a loss or anything. To her, it’s such a huge difference.”

The trio communicates with Ruth through letters exchanged via World Vision and aims to keep the school updated through Facebook. They hope, one day, the school can sponsor multiple children.

“We want everyone to feel like they are playing a part in saving someone’s life and making an impact,” Rhiana said.

“We’re really happy to see the school backing it. We wanted it to be run through the school, so they feel they are part of it,” Izzy said.