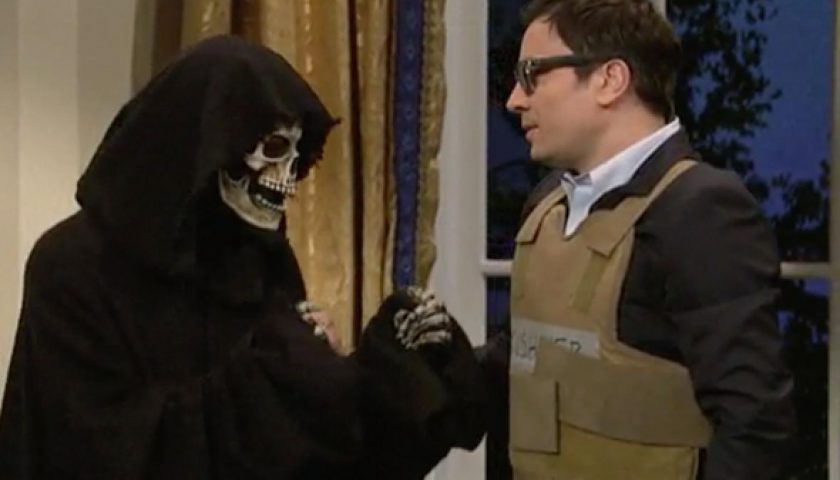 The main thing to root for in any intramural battle between fascists is injuries, but in the case of Jared Kushner v. Steve Bannon—a clash Slate’s Jim Newell called “the battle for the soul that Trump doesn’t have,” it’s ok to hope the feckless, beltless trust fund kid defeats the white supremacist. That’s a fantasy Saturday Night Live let us live out in this week’s cold open, in which Alec Baldwin’s Donald Trump reviews his first 100 days and chooses an advisor, reality-show-style, to continue to the next round of his presidency.

Not all of the sketch works. Baldwin and Beck Bennett—playing Mike Pence this time instead of his usual Trump-sketch role as Vladimir Putin—are past the point of diminishing returns when it comes to jokes about Trump’s stupidity, and honestly, the idea that a bigoted dummy like Pence is the smart one in the executive branch is too sad to be funny. Meanwhile, as with any Trump sketch, the writers have to rush hell-for-leather to fit a week’s worth of disasters into the four minutes they’ve got to work with. (The idea that the Bannon/Kushner feud was the Trump fiasco everyone would be talking about seems hopelessly quaint now that we’re halfway through our surprise North-Korean-themed weekend.) Still, even if the North Korea jokes are a little shoehorned in, Trump’s description of Kim Jong-un is good:

Kim Jong-un is a bad, bad guy. He’s a warmonger, he’s quick to anger, he’s a huge narcissist, he’s got a stupid little haircut—I mean, why would they let a man like that run an entire country?

And Jimmy Fallon’s appearance as Jared Kushner, complete with flak jacket, blazer, and Wayfarers, is such an inherently silly image that it almost makes up for the ongoing missed opportunity of putting someone in a grim reaper costume instead of working up a good impression of Bannon. In the show’s defense, spending a lot of time and effort on Bannon when he might be gone in a week wouldn’t be a good use of anyone’s time. On the other hand, not treating Trump’s tinpot Julius Streicher more viciously when we might all be gone in a week seems like the kind of thing Saturday Night Live writers will put in the “regrets” column if the missiles start flying. Go for the throat, guys—flak jackets have low necklines.