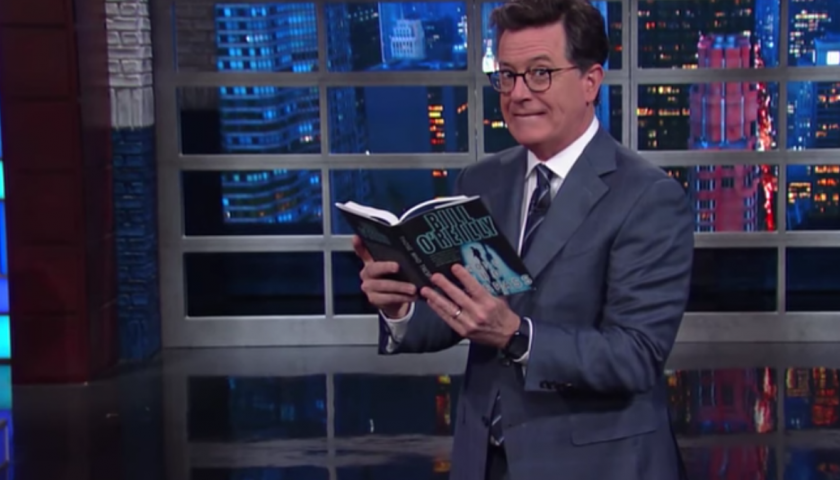 Stephen Colbert emerged onstage Thursday night a little distressed. “I need something to hold me together,” he explained, “because I’m still reeling from the loss of Bill O’Reilly.” The Fox News icon’s shocking, overdue, and expensive removal from his own network hit the former Colbert Report host particularly hard, naturally, as a fellow former TV blowhard used to dominating in the ratings.

Desperate for a way to make sense of it all, Colbert turned to an old book of O’Reilly’s: the 1998 novel Those Who Trespass, whose dedication actually, seriously reads “to the women in my life”—a group, according to Colbert, better known as “the plaintiffs.” The book presents a scenario close to the one O’Reilly currently finds himself in and posits one way of moving on. Colbert read one unembellished excerpt of the book, and it’s a doozy:

His career was the source of his feelings of omnipotence and grandiosity. His TV job gave him daily ego gratification and excitement … It reinforced his opinion that he was a very special human being. He got the attention he craved, the admiration of thousands. Being on TV was like a drug to him and when it was taken away from him, he had to find a substitute drug … Planning out and carrying out the executions of those people who had humiliated him.

“I just want to point out,” Colbert nervously exclaimed after completing the passage, “I never humiliated you!” Oh, Stephen, if only that were true.