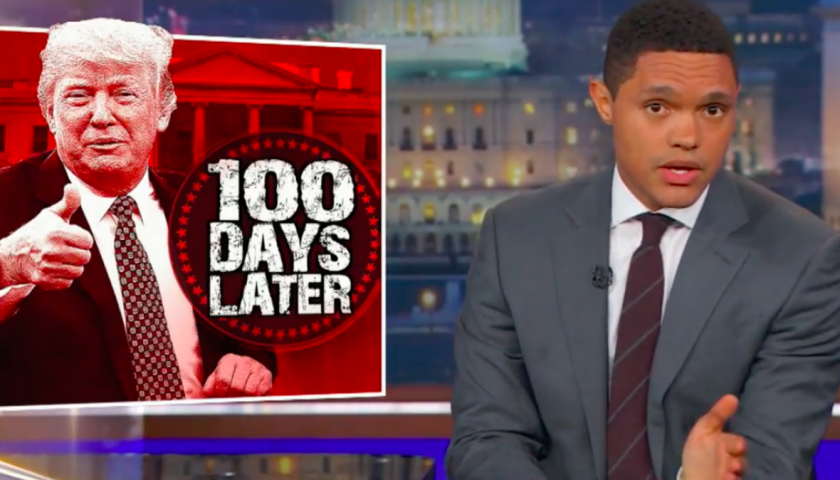 Saturday will mark 100 days of Donald Trump’s presidency—and yes, believe it or not, it has really only been one hundred days. But the president is downplaying the occasion, something late night hosts have been quick to seize on, given that Trump has still failed to fill his Cabinet, repeal Obamacare, pass major tax cuts, or do many of the things he promised he would within that time frame. Stephen Colbert decided that his Late Show monologue should focus on what the president has accomplished, including passing legislation that makes it easier for certain mentally ill people to buy guns and for hunters to kill hibernating bears.

Trump has disputed the claim that he hasn’t gotten a lot done in his first hundred days on (where else?) Twitter:

“S.C.” has been interpreted to mean “Supreme Court,” but Colbert suggests another alternative: His own name. “I have to say, Donald Trump has done a lot for me in the first hundred days Thank you for your service, Mr. President,” said Colbert, who has enjoyed some of his best ratings since Trump took office. “Now I feel dirty.”

While his supporters might give the president credit for at least trying to do what he said he would, Trevor Noah, over at The Daily Show, does not. “Boy Scouts don’t earn badges for trying to help an old lady across the street,” he noted. “They either help her across or she gets crushed by an eighteen-wheeler.”

Since Trump has now decided that the 100-day mark is an “artificial barrier” that shouldn’t apply to him, Noah points out that he may not want to set a precedent of disregarding a number just because he doesn’t like the result. “Because if most voters in America got to choose the number they prefer, you wouldn’t be in the White House, Donald.”