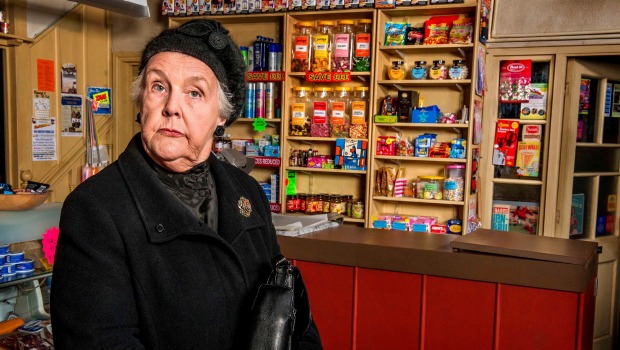 By actor Stephanie Cole’s reckoning, “once upon a time” is one of the most exciting phrases in the English language.

“Once upon a time”, she says, rolling the phrase in her warm voice, ” ‘once upon a time…what? Wow. What is it going to be about?”

The veteran actor is on the phone from her home near Bath in the West of England, mostly to talk about the latest season of her show Still Open All Hours, but so vibrant and engaging as she is the conversation wanders far and wide.

‘Once upon a time’ enters the mix as she answers a question about why she got into acting. The thing is, she doesn’t really know.

At 16, after being expelled from school and spending a year training as a shorthand typist, she attended the Bristol Old Vic theatre school.

“It was”, she says, “the best thing that could have happened to me. That was all I ever wanted to do.”

Her first role was Madame Arcati in Noël Coward’s play Blithe Spirit. One of her more recent has been reprising Delphine Featherstone, aka ‘The Black Widow’ in Still Open All Hours – a reboot of the 1980s original comedy starring Ronnie Baker, who died, age 76 in 2005.

Over her career Cole has repeatedly played characters much older than herself, including Dr Beatrice Mason in the 1980s war drama Tenko and retired photojournalist Diana Trent in the 1990s comedy Waiting For God. Now, at age 75, she points out she is finally the right age for Delphine – which makes it “even more fun”. The show, she says, has “been a joy”.

In 2015 Cole told the TV Guide: “I’ve always been a rebel and I’ve always questioned authority. I was a very troublesome child because of it.”

Curious, I ask, what kind of troublesome?

“I got expelled from school for one thing”, she says. “You have to remember that it was in the 40s and early 50s and consequently the morals of the time were still that children should be seen and not heard.”

This was a problem, explains Cole, because she was raised by her mother who, “if she said ‘don’t do that’ she always said ‘don’t do that because’.” Being told not to do something “because I say so” didn’t sit well: “I would think ‘bugger that for a game of tennis’ that doesn’t make any sense to me…”

Are there things that get that rebellious streak going these days?

“We live in crazy and troubled times and yes, I feel very passionately, as I think we all do … passionate about justice and looking after people who are not as able as some of us to look after ourselves. I belong to the Women’s Equality Party in England, I’ve always been a socialist and I believe very strongly in all those things. We don’t all have to believe the same things but I think we all have to treat our fellow human beings with respect no matter who they are and where they come from.”

In the 2005 Queens Birthday Honours Cole received an OBE for her services to drama, the elderly and mental health charities.

She chose mental health charities because it’s something she’s personally connected to – her brother has schizophrenia.

And now, as she puts it, in her “76th year to heaven” she feels strongly about the position of older people.

“People of my age and above are still leading very vibrant, useful lives and we still feel the same as we did maybe when we were 14 or 15…I do resent the fact that very often someone is expected to play elderly granny in the corner or something and actually that’s not the truth of the matter.”

Back to Still Open All Hours: Is it nice that such a British show airs all around the world?

“Oh yes, it’s great. It’s lovely if you can entertain people or make people laugh or cry or whatever.

“Particularly in New Zealand actually, because…I have a cousin who lives in Christchurch and so, I feel, you know, if something that I’m in goes over there and she watches it then it makes us a bit closer, which is very nice.”

Cole is no stranger to New Zealand. Following the popularity of Waiting For God she extensively toured the North and South Islands performing a monologue by Alan Bennett. She had a wonderful time.

This year Cole is busy. She’s filming Man Down, a comedy staring British comedian Greg Davies and then the fourth season of Still Open All Hours. Next year, she’s in a new play.

“That’s if I’ve still got my brains and my legs – then just, you know keep on keeping on. I love it.”