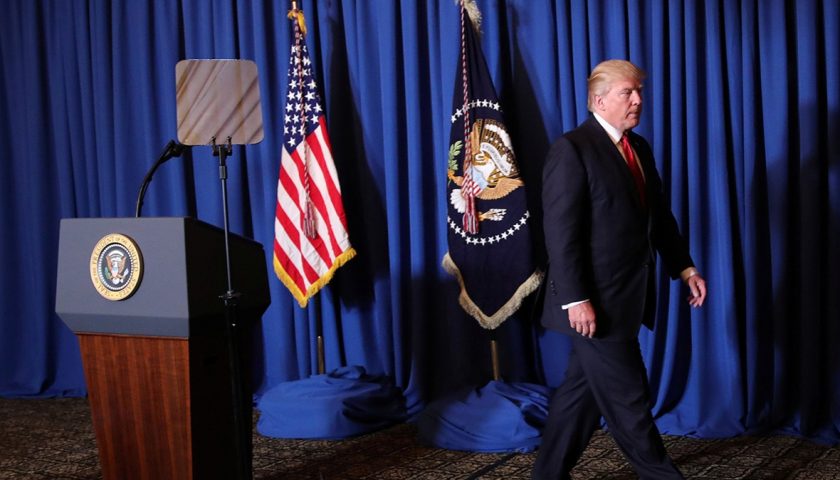 All you have to do is look at his recent interviews.

On Thursday, an American missile strike destroyed the air base from which Syrian government forces launched a chemical weapons attack that killed 80 civilians. “It is in this vital national security interest of the United States to prevent and deter the spread and use of deadly chemical weapons,” said President Trump, speaking from his vacation resort at Mar-a-Lago. Just a few days earlier, the Trump administration had taken the view that the U.S. must reach some kind of agreement with the Syrian president, Bashar al-Assad. “You pick and choose your battles. … Our priority is no longer to sit there and focus on getting Assad out,” U.N Ambassador Nikki Haley said last week. Now, it seems, the White House is committed to a new course.

That this decision signals an abrupt, almost impulsive change hasn’t stopped pundits from either praising Trump or crediting him for an allegedly newfound seriousness. “Donald Trump became president of the United States last night,” said Fareed Zakaria on CNN. “This was a big moment for him.” Matt Lewis, a conservative “Never Trump” columnist for the Daily Beast, tweeted that “This seemed like a very different Donald Trump. More serious—clearly moved emotionally.”

Zakaria and Lewis are representative of the mood that has gripped pundits in the wake of these strikes: a desire to believe that Donald Trump is more serious and presidential than he appears. That he is a normal president, imbued with the qualities shared by his predecessors: knowledge, political savvy, dignity.

Perhaps, goes the thinking, the vast responsibility of the presidency has brought Trump’s best self to the fore. He now understands the weight of the Oval Office and is trying to shoulder it the best he can. And the strikes in Syria represent Trump finally grappling with the awesome power of his office.

We don’t yet know the details of the deliberation behind the airstrikes, but we know enough about Trump to say one thing, at least. There is no All-New All-Different Donald Trump. He hasn’t suddenly sobered up. And even if you agree with his decision to attack Syrian government assets, there’s still no evidence that his temperament has changed, or that he’s gained any wisdom or insight. Indeed, his first two months as president are demonstration that the Trump who now sits in the White House is the same Trump who blasted Mexican immigrants as “rapists,” attacked a Gold Star family, and bragged about sexual assault. He’s still as ignorant of American government—and as contemptuous of truth and knowledge—as he was when he took the oath of office.

The evidence for this, beyond just his behavior and rhetoric, are two recent interviews, one with Time magazine and the other with the New York Times. In former, conducted in March, reporter Michael Scherer presses the president on several of his claims, including the charge that President Obama had illegally wiretapped him and his associates. Scherer asks Trump if, given testimony from his FBI and National Security Agency directors, he has second thoughts about the accusation. He even says that Trump’s tweets (he made the charge on Twitter, as is his custom) haven’t “panned out.” Trump does not back down or de-escalate. “I have articles saying it happened,” said the president, though no actual news organization had found any such thing. When Scherer pressed Trump on a different, unsubstantiated claim, that 3 million people voted illegally in the 2016 election, the president took the same tack. “Well, I think I will be proved right about that too,” he said, before defending another false claim—that New Jersey Muslims celebrated the Sept. 11 attacks.

Reading the interview, it is clear that Trump doesn’t believe in truth the way we commonly understand it. For most people, truth—or at least, truth based in facts—is verifiable. Yes, it’s tied to our experiences and derives meaning from our interpretation, but it exists outside of us. For the president, by contrast, what is true holds no clear relationship to what can be verified—what can be seen and tested and confirmed. Trump defends obviously untrue claims (like the charge that Rafael Cruz, father of Ted, was involved in the JFK assassination) by citing other defenders of those claims; he’s not interested in proof but in whether he can find someone else who agrees with him. Better yet, he finds a whole stadium of them. “The country believes me,” said Trump about his wiretapping claims. “I went to Kentucky two nights ago, we had 25,000 people in a massive basketball arena.” Being president hasn’t changed this frame of mind or made him reconsider its utility.

The same goes for the importance of basic knowledge. Throughout the campaign, Trump derided the notion of expertise. But as president, his agenda has been stymied by his lack of information. It is difficult to negotiate or make deals when you don’t know the basics of public policy. This ignorance is on display in his other interview, with the New York Times.

When asked simple questions about his political priorities—the confirmation of Supreme Court nominee Neil Gorsuch, for example—he goes off on rants and tangents about perceived political enemies. “I think the Susan Rice thing is a massive story. I think it’s a massive, massive story,” said Trump, in response to a question about Gorsuch. He suggests Rice committed a crime—that she was responsible for the aforementioned surveillance—and dangles the possibility that President Obama was ultimately behind this alleged espionage. An incredible claim, with almost no basis in fact.

When asked about his infrastructure plan, a marquee element of his campaign platform, Trump is nearly incoherent: unable to explain its content or structure, unable to say anything beyond platitudes and sound bites. “Well, we’re working,” said Trump in response to reporter Maggie Haberman’s question about his timeline for an infrastructure bill, “because you know we have a very solid administration. We have some very, very good people.” When Glenn Thrush asks Trump about the attacks on Syrian civilians and Russia’s role in the country, the president struggles to give a substantive answer, opting instead to blame his predecessor:

There are moments of lucidity in the interview—areas where Trump is engaged and can answer coherently, albeit in language that challenges grammar and linear structure. When the president talks about infrastructure, for example, it’s clear that he cares about the issue, even if he can’t quite tell you what he plans to do or what has been done.

But that’s a low bar. The broad takeaway is that President Trump is profoundly ignorant of the government and the country he’s in charge of and that he’s unable to discuss even basic questions without help from an array of assistants (who make an appearance in this interview). Donald Trump may be the least knowledgeable president we’ve ever had, a deadly combination for someone who also holds the idea of truth itself in cold contempt.

That, unfortunately, is where we are. With a president who knows nothing and doesn’t seem to want to know anything. Who lies with abandon and defends untruths on the basis of nothing. We’ve never seen a president like Trump, which means it is tempting to believe that it’s not bad as it looks. That, at some point, he will rise to the challenge of the office.

He hasn’t. He won’t. Don’t let the president’s ability to perform seriousness distract from the reality of the situation. Donald Trump is still unfit and still unstable. And as we await the fallout from his missile strikes, we should keep those facts in mind.