He was at an event to support his local GAA club, he said. He doesn’t regret the photo.

TRANSPORT MINISTER SHANE Ross says he doesn’t regret being photographed with a feather boa at the weekend.

The Minister, who unions and and opposition TDs have accused of being aloof from the continuing Bus Éireann crisis, said he had been supporting an event at his local GAA club when the pic was taken.

He had only been wearing the boa for a few moments when the photo of him alongside socialite Amanda Brunker was snapped, he said.

The photo was taken at the weekend at a fundraiser for new changing rooms for Naomh Olaf’s female teams, an event that the Minister apparently agreed to attend some months ago, according to Brunker

Brunker confirmed yesterday that the pic was taken at a lip-sync battle competition held to raise funds for the Sandyford club. Brunker and Ross were both judges for the night’s event. 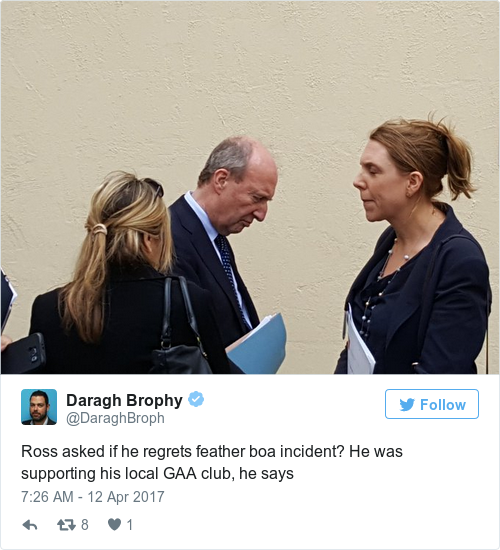 Ross asked if he regrets feather boa incident? He was supporting his local GAA club, he says pic.twitter.com/10znhL1UjK

Asked at a road safety event today whether the appearance of the photo may have been offensive to drivers, he said:

“I’m really sorry if they did feel that.

Asked whether he regretted it, he said that he didn’t.

People who were involved in promoting sport for young people had to be supported, he said.

I’m Minister for Sport and I have to support local clubs and I’m going to continue to do that.

As the questions continued (the media asked about other issues too, by the way) Ross got onto the particulars of the ‘feather boa incident’:

“The feather boa was actually put on me for a few seconds and somebody took a photograph … I didn’t go and wear it there.

It was just a very pleasant evening for a very good cause helping young people who want to get involved with their GAA club and raising funds for it and I’m delighted to have been able to do that.

NBRU members who have been picketing outside Busáras in Dublin in recent weeks crossed the road to make their presence known to the Minister, who was attending the road safety event inside Store Street Garda Station. 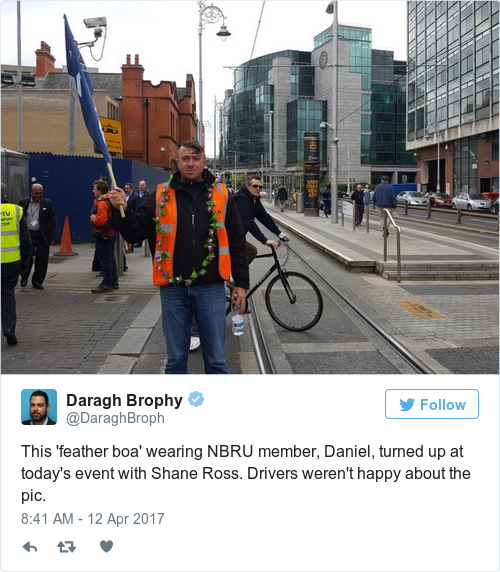 Several drivers who spoke to TheJournal.ie said they weren’t happy about the picture and that it showed Ross wasn’t concentrating on fixing problems at Bus Éireann.

An all-out strike at the transport provider is now in its 20th day. Talks between management and unions are continuing.

One driver, Daniel, who showed up wearing his own approximation of a feather boa (it was a plastic flower-necklace, but close enough … ), said the Minister needed to do more to end the strike.