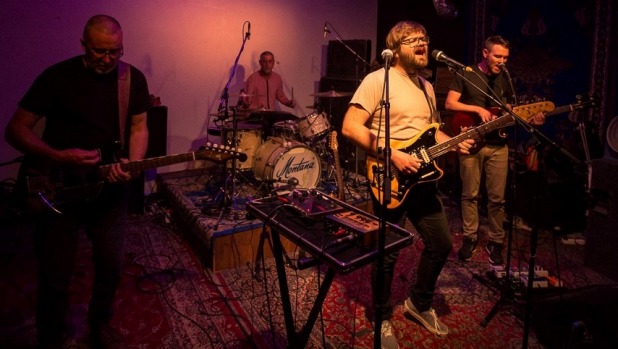 It will be a first for Slow Boat Records on Saturday as it hosts its first album release in celebration of International Record Store Day.

The pan-generational Wellington group Teeth are bringing their brand of psychedelic rock to the store as they release their self-titled debut album.

The band, consisting of Lukasz Buda and Tom Callwood of The Phoenix Foundation, the Mutton Birds’ David Long, and drummer Anthony Donaldson, will perform in the Cuba St store for the 10th annual International Record Store Day.

“We have had a lot of great acts in the past, and we are proud to be continuing that [this year].”

Dave Dobbyn, Neil Finn and Anika Moa are some of the renowned artists that have graced the floor of Slow Boat in celebration of the event.

This year will feature two in-store performances, as dream-pop five-piece French For Rabbits will feature alongside Teeth.

“There is something here for everyone,” Taylor says.

“It is a nice way for us to say thank you in such an intimate way.

“Such a close space, with a lot lining the walls, creates a remarkably intimate location.”

There was a time where Taylor saw the support of record-buying being “chased away in droves”, with the evolution of online streaming and illegal downloads.

He believes the renaissance of the record store community bodes well for the continuation of such events.

“Record Store Day is a great way of ensuring the celebration of that culture, and its resurgence,” he says.

“It is something that we are really proud to support.”

As well as the two performances, the event will see album signings and the sale of limited-edition vinyl sold just for the day.

It is the store’s busiest day of the year, and it will open at 9am as opposed its usual 10am.

If the event is anything like those of previous years, there will be lines out of the doors, Taylor says. “If there is something you have your eye on, get in early.”