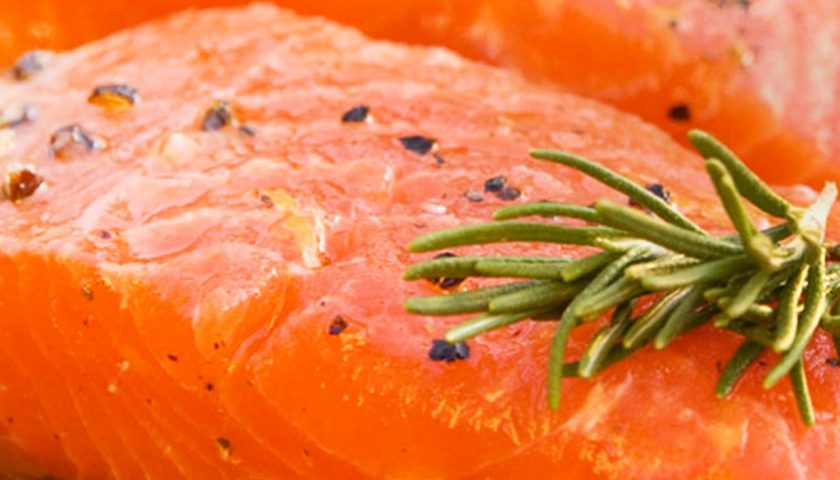 The debate over a fish shows that scientists can be too quick to dismiss the public’s concerns.

“Keep Frankenfish off my Dish!” a protester’s sign read. Another, adorned with six red hearts, suggested that “real people love real salmon.” A couple of years ago, protests against the approval and sale of genetically modified salmon targeted the Food and Drug Administration and supermarket chains across the country, attempting to halt the approval and sale of the AquAdvantage salmon—an Atlantic salmon modified with DNA from the Chinook salmon and the ocean pout. The borrowed genetic material lets the fish grow year-round and reach market size in half the time as its natural counterpart, but it’s also spurred passionate public debate.

But the approval was quickly followed by a flurry of controversy and charges of insufficient consideration of key issues. A consortium of environmental groups lead by Earthjustice and the Center for Food Safety sued the FDA for approving the AquAdvantage salmon, in their words, “without considering or fully disclosing the environmental and other risks of this unprecedented decision.” Two months after the approval, Congress also threw a wrench in the works by adding a rider to a spending bill that tasked the FDA with spending not less than $150,000 to develop labeling and implement a program of consumer disclosure for the fish before it could be made available for sale. As a result the fish is not yet anywhere near U.S. dinner plates, caught up in a seemingly endless process of contestation, with no clear end in sight.

To many in bioscience and biotechnology circles, this is a case of politics contaminating science. In an open letter to President Obama in 2014, a group of “concerned international scientists and global technology company executives” argue this point:

The American people, and indeed all people everywhere, are best served by a trusted objective regulatory process truly based on sound science, a system which can be counted upon to evaluate and act on the applications it receives without fear of political interference.

These scientists and others offer a picture of a Manichean world divided into those who are for scientific and technological progress and those who are against it—a representation of the world that we have been seeing more and more of lately in reports of a “war on science.” But drawing this line is dangerous. The real problem here is the regulatory process itself, which forces dissent to take the narrow form of challenges to scientific data and methodology and ignores other questions about what’s at stake.

The FDA approval process for the AquAdvantage salmon took longer and included more opportunities for public comment than most products the FDA reviews. This unique openness to public input was balanced by a careful parsing of what counts as scientifically and contextually relevant and what does not. The agency received 38,000 comments in response to its draft assessment alone, but it determined that just 90 were worth considering. The remaining comments were discounted as irrelevant because they did not directly address the details of the regulation process, or they raised issues beyond the mandate of the agency. These disregarded comments focused on a wide range of concerns, including patenting and ownership regimes of seed and crops; how deploying genetically modified corn and soy would affect the United States’ image around the world; continuing failures of existing market configurations to address inequality and food distribution; and the long history of multinational corporations central to the commercialization of biotechnologies, such as Monsanto, intentionally obscuring the negative impacts of their chemical products and byproducts while undermining human health.

So the FDA is not the forum for deliberation on the meaning of giving entry to this new form of life into our environment, grocery stores, and dining rooms. But what is? The FDA approval process is the only existing avenue for public consideration of technological innovation of this kind. Accordingly, the agency’s narrow reading of what kinds of input are relevant represents a significant dismissal of a broad range of relevant concerns.

Some might read the vast public preoccupation with a broad set of social, political, and economic issues as the contamination of science with politics. But I would suggest that this is actually a case of the reverse problem: seemingly endless conflict around the AquAdvantage salmon reflects the limitation of using narrow scientific terms to address questions of broad social, political, and economic significance. As things stand, the only legitimate way to engage in debates about the entry of the AquAdvantage salmon and other genetically modified organisms into our environments, meals, intellectual property regimes, and beyond is to contest its approval at the level of regulatory science. When the system asks the public to limit objections to narrow technical concerns, it undermines regulatory legitimacy and stultifies democratic debate—and perhaps most importantly, it contributes to the problematic discourse around science itself. When our modes of public deliberation strictly define what counts as a legitimate view on these issues, we end up portraying a good portion of the population as “against science,” when that in fact could not be further from the truth.

The vast majority of people in the world, not being scientists or angel investors, have no say over the technological trajectories that will shape our world and our lives. We are instructed to continue funding “basic science” and patiently wait and watch as the world is transformed around us. Scientists often dismiss resistance to the AquAdvantage salmon and other biotechnologies as borne of scientific ignorance. But it’s a lot easier to understand people’s reluctance if you realize that the debate is about much broader questions than science alone can answer.

As the first genetically engineered animal developed for human consumption, the AquAdvantage salmon can be understood as an early form or precursor to products of more advanced practices of synthetic biology. Even as the power and precision of these techniques increases and the particular technical challenges associated with the salmon are left behind, the core issues and deep public resistance around the AquAdvantage salmon will likely persist and haunt continued efforts to reshape environments, economies, and human life through the biological sciences. Synthetic biology is billed as having the potential to transform the world in a way that will disrupt prevailing economic and geopolitical paradigms and “reshape the very fabric of life.” The one thing both sides of the fishy debate seem to agree on is that the AquAdvantage salmon is a “pioneer” technology, and what happens to this fish could set the stage for the role that biotechnology will play in our food system in the century to come. As one commentator opined for the New York Times:

We should all be rooting for the agency to do the right thing and approve the AquAdvantage salmon. It’s a healthy and relatively cheap food source that, as global demand for fish increases, can take some pressure off our wild fish stocks. But most important, a rejection will have a chilling effect on biotechnological innovation in this country. [Emphasis mine.]

This framing suggests that biotechnological innovation is a necessary and unmitigated good. But for many, the prospect of a world radically altered by biotechnology conjures past experiences in which scientific “progress” didn’t go as planned—like the devastation and political instability ushered in by nuclear weapons. Similarly, to some, a dam looks like progress, development, and economic prosperity. But to others, it looks like the violent end of a way of life, heralded by the destruction of ecosystems and entire species.

The debates over the AquAdvantage salmon aren’t narrow and technical—they’re multifaceted, laden with questions of political, economic, and social values. They are about what kind of world we want to live in and what types of transformations are beneficial, desirable, and helpful—and for whom. To position science on one side of these debates is not only patently false but detrimental to public discourse and productive political deliberation.

Nonetheless, resistance to biotechnologies is often framed as a problem of the uneducated masses meddling in areas where they don’t belong. The open letter to Obama by the concerned scientists and technologists, for example, claims:

Protests by anti-technology interests are, we believe, the root cause of the unconscionable delays in FDA approval. These groups’ criticisms are based on misplaced economic/marketplace concerns and reactionary fears of people who either don’t understand or choose not to understand the science behind the AquAdvantage Salmon.

Characterizing legitimate concerns about what kinds of technologies enter and help shape our world as “anti-science” is more likely to alienate than inspire “everyday Americans to identify with this vision of what science can do, and to believe in it.”

The long journey of the AquAdvantage salmon may turn out to have been a waste of time, energy, and resources on all sides, but perhaps we can make it productive in one way. Understanding the limitations of the process can help us think critically about how decision-making about synthetic biology going forward might be more open to a broader set of concerns and voices much earlier in the innovation process. The way forward is not drawing battle lines between those who are “for” or “against” science and closing down regulatory processes to all but the narrowest risk-based considerations. Rather, we should be forming and expanding spaces for a wide range of participants in creatively considering how to solve society’s biggest challenges. We need new ways of thinking and talking about technological promise and possibility in the world that we live in.

This article is part of the synthetic biology installment of Futurography, a series in which Future Tense introduces readers to the technologies that will define tomorrow. Each month, we’ll choose a new technology and break it down. Future Tense is a collaboration among Arizona State University, New America, and Slate.