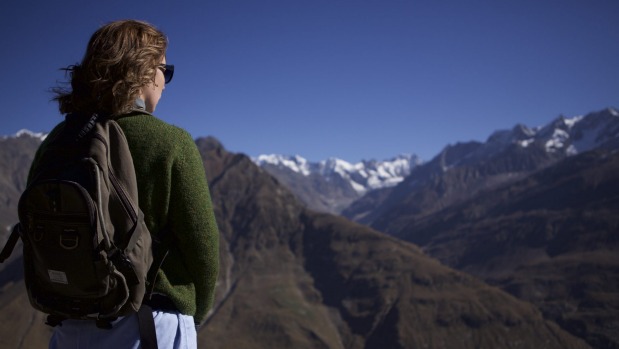 Best known for her role on TVNZ’s Step Dave, Sia Trokenheim’s latest role is on a bigger screen and with a far more global backdrop.

The Swedish-born, Kiwi favourite plays Julie Hansen in the drama Beyond the Known World.

The first-ever New Zealand-India co-production, it’s the story of two recently divorced Auckland parents who are forced together again when their daughter goes missing in India.

What was it about the story that appealed to you?

Initially, I  thought it possessed an interesting little plot and way to tell a story about a dysfunctional family. But, after I read the script over and over again, it really is about this couple who are hurting. However,  they just have too much unresolved conflict between the two of them and it’s really about them trying to reconcile their differences – in this really extreme way. I said yes to the role because I thought, “this is going to be a very complex role to play, in a very complex relationship, in a very complex place” – the Himalayas in India.

But what we found, once we got there and we got to talk to the locals and the travellers and people who had moved there, is that this kind of story is actually really common. A lot of people go missing.  A lot of Westerners go to India, particularly the Himalayas because it’s so beautiful,and it’s an opportunity to rediscover yourself and sometimes escape the world as they know it. They can suddenly realise they don’t need their social services number, they can just get lost in themselves and a lot of people just enjoy leaving the Western world behind. It’s amazing to realise how simple you can live your life if you forget about the cafes, work, traffic and the stresses you find here..

There’s various reasons people go missing, some people choose to cut ties with their families because they want to be true to themselves and be no one over there. Some might become involved in drugs and the mafia that live there – which I was surprised to find out about.

People also go over there, and I don’t mean this in a disrespectful way, because they want to live a hippie lifestyle and might set up a tent in the hills and not realise there are actually dangerous wild animals, and go missing that way. We were told these sorts of things by a lot of travellers we met.

We were there for eight weeks. It was wonderful, I had never been to India before and I didn’t realise that it could look the way it did over there. It was so beautiful and serene and calm and, I have to say, the locals were astonishing – so helpful and humble.

What were the biggest challenges of the role? ​Leaving my family was pretty hard. I’ve got two kids now and we had just moved into our new house three weeks prior. I told  the producers that I was happy to go as basic as we needed,. I’m not a prude and if  I had to go to the toilet in a hole in the ground I would. However,  we lived pretty comfortably in the nicest hotel in Manali. I think one of the toughest things about the shoot was when we were filming by a waterfall and in order to get there we had to walk up a mountain for 50 minutes in the rain. It was cold and it was just up, up, up, up. And that was before we had to put the performances on. It wasn’t comfortable when we got there either, but it was okay. But I think that was the time Mother Nature made her presence known and we realised how small we are as humans.The locals  dealt with everything so gallantly.

Step Dave, Everything We Loved and now this. Do you mind being constantly cast as a mother?

It is interesting that there came a point in my life where suddenly I wasn’t going for the young, sweet love interest anymore. It was almost as though when I had my own children, I started getting meatier roles.

I think that’s probably because I’ve experienced more of my own emotional prism, so to speak. I’ve seen the best and the worst  of me – incredibly highs, but also incredible lows. Initially I was fighting and trying to cover up when I wasn’t feeling 100 per cent, or when things were feeling really rough, but then I realised that this is all I have – my mind, my body,  my soul and my heart.

If I try to pretend I’m something I’m not, then I’m lying to myself and the world. And I don’t want that for me and my husband and my children. So once I found peace within that, that’s when I got Everything We Loved, that’s when I got Step Dave, that’s when I got this film. It’s funny how just by accepting the best and the worst of me has propelled my career, and I’m just grateful I came to that realisation that I have to be okay with myself as I am at any given time.

Finally Sia, what’s up next for you?I’m an entrepreneur in the making, I have so many ideas, but I find it hard to talk about them too much because many of them are still in early stages. I’m currently making a documentary which I hope will be on TV screens in the next couple of years. It’s exploring humans – so to speak – humans and all their shapes and forms and where they come from and how different we are, depending on what culture we were born in.

It’s something that really pulls at my heartstrings, having come from the outside myself, that we really need to try and be more forgiving towards our differences. I’ve got Polish parents, but I was born and raised in Sweden and came to live in New Zealand by myself when I was 20.

Beyond the Known World (M) opens in select New Zealand cinemas from April 20.