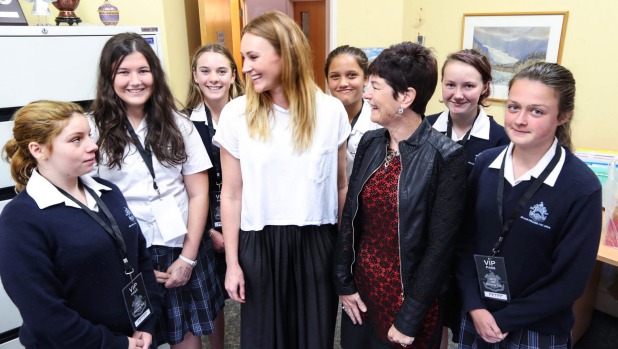 A new reward scheme at Nelson College for Girls saw the principal’s office turned into a green room.

Nelson’s own former Shortland Street star, Amelia Reid-Meredith paid a visit with a long-time school friend to meet students who had earned a spot on the new PRIDE VIP morning tea.

Held near the end of every term for girls who have practiced one of the school’s values, three year nine students and three year 10 students were picked at random from the junior students who received a nomination throughout the term.

Nelson College for Girls year nine dean Jen Dalton said if the girls were in class and did something that fell into one of those categories, a teacher could nominate them for a PRIDE award.

“I want to reward them for great behaviour. I think good things happen to good people and I think it’s a roll-on effect.”

The nervous girls with lanyards proudly hung around their necks, huddled into the principal’s office with the year nine and 10 deans, the principal and head girl.

Reid-Meredith was asked questions by the girls, including who her friends were on set, how hard the profession was to get into and if she had any tips for the girls.

In response to the latter, she said “stay focussed … stick to your own dream”.

It was the first time Reid-Meredith had returned to the college since she left in 2003.

“I was really nervous about coming back but it’s wonderful.”

She said she loved meeting the girls over morning tea.

“I’m such an advocate for young teen girls. I think it’s such a young, delicate age and I think we need to support that age group.”

Year 10 PRIDE award recipient Peita Milne was nominated by her teacher when she demonstrated personal excellence in social studies.

MIlne said she was “really, really shocked” when she was drawn to attend the morning tea.

She had “no clue” at that point she would be in the same room as Shortland Street character, Bella Durville. When she found out the day before the VIP event who the celebrity was, she thought, “Oh my god, yay, I watch Shortland Street!”

Milne said the girls definitely tried harder in class, now that they had a prestigious award to work towards.