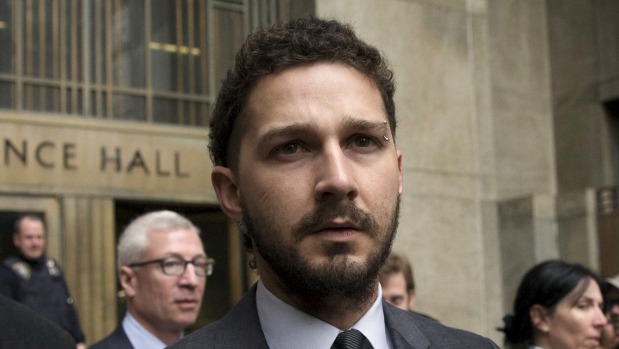 Shia LaBeouf was kicked out of a popular Los Angeles-area bowling alley on Wednesday night (US) following a verbal spat with a bartender. Staff at Pinz in Studio City asked the actor to leave after he started hurling abuse at an unidentified server, calling him a “f…ing racist”, according to TMZ. It is not clear what sparked the altercation, which continued as Shia was being escorted off the premises. Video footage of the confrontation, shot by another bowler, has been posted online.

READ MORE: * How bad is Shia LaBeouf’s new movie, Man Down? * Shia LaBeouf’s new flop Man Down sells single ticket at UK box office * US actor Shia LaBeouf arrested outside New York City museum * A live stream of Shia LaBeouf chanting was disrupted by Nazi-themed dancing – then things got weird  * Shia LaBeouf delivers bizarre motivational speech Pinz is just a short distance away from the Ventura Boulevard bar, where Shia brawled with another man in 2011. The actor was handcuffed by cops after the scuffle at Mad Bull’s Tavern in Sherman Oaks, California, and detained for 20 minutes before he was allowed to leave the scene. No arrests were made, and LaBeouf later explained, “I walked out to go and have a cigarette; I was with some friends and some guys instigated me and that’s what it was. (There was) some name calling. I didn’t know them. It was just an awkward situation… People get drunk, people get crazy.” The Transformers star has been arrested for public intoxication twice – in 2014 he was jailed for causing a ruckus during a Broadway performance of Cabaret. As part of his punishment, he was ordered to enrol in an alcohol treatment programme, which he completed in 2015. He told Variety of the toll alcohol took on him, explaining, “I start drinking and I feel smaller than I am, and I get louder than I should… You don’t touch it. Alcohol or any of that s**t will send you haywire. I can’t f**k with none of it (sic). I’ve got to keep my head low.” Shia has also suffered a recent professional blow – his latest movie, Man Down, has been pulled from British cinemas after selling just three tickets in five days.