The fact that my Bill will save lives is not a truth some vested interests want to hear, writes Transport Minister Shane Ross.

JUST IMAGINE YOU were asked the following question:

“If you were offered the power to save one innocent person’s life, would you take it?”

Most people would answer “yes” wouldn’t they? We would be astonished if they didn’t. And yet when given the choice – not just to save one but possibly many lives – there are some among us who are refusing to do so.

Why? What manner of self-interest or muddled thinking would make right-thinking people balk at the chance to save lives?

It’s a question that’s been asked many times recently.

Not just by me, but also by the Road Safety Authority and the families of those who lost their lives needlessly on our roads, as well as by the vast majority of ordinary people up and down the country (as evidenced by a recent RSA survey), most particularly those in rural Ireland where most fatal road collisions occur.

The statistics are plain. Between 2008 and 2012, 35 people were killed in crashes where drivers/motor-cyclists had a recorded BAC (blood/alcohol level) of between 21 and 80mg (and were deemed culpable due to alcohol being a contributory factor).

Eighteen (16%) of these fatalities were killed in collisions where drivers/motor-cyclists had a recorded BAC level of between 50-80 mg/ml (and were deemed culpable due to alcohol being a contributory factor).

Now, those with a lower than 50mg BAC are actually within the current law – yet fatalities occurred within these limits. But those with a BAC of between 50-80mg are driving illegally and they know it. Yet many, when caught, just pay a fine, lose three penalty points and get back into their car.

Again, as proved by recent RSA research, the vast majority of people in this country want this ‘anomaly’, ‘loophole’, ‘political cop out at the behest of vested interests’ – call it what you will, it’s still wrong – removed from our legislation.

The figures show that it will save lives. And it will also send a very strong message that drinking and driving is not tolerated. It may also encourage those who think they can have the one pint, not to have a second or third.

So, who on earth could be against this measure? It’s hardly radical. It’s just making the penalty for drink driving more equitable. It’s not zero tolerance.

This week the Vintners’ explained to the Joint Oireachtas Transport Committee why they don’t support this Bill.

In a letter sent out earlier this week to try influence public and political opinion the VFI (Vintners Federation of Ireland) wrote:

The basis of our argument is that the report that the minister is relying on does not produce any evidence that those between 50mg and 80mg have caused fatal accidents.

The report the VFI are referring to is one published by the Road Safety Authority entitled ‘Fatal Collisions 200-2012 Alcohol as a Factor’.

In response to the accusation that analysis of its own research was incorrect, the RSA had this to say.

The Road Safety Authority (RSA) utterly rejects this assertion by the Vintners Federation of Ireland. Their statement is simply not true. It is not backed by the facts. The VFI has conducted a highly selective and disingenuous interpretation of the RSA’s Pre-Crash Report on Alcohol.

They have deliberately tried to lessen the role of alcohol as a contributory factor in fatal crashes, and to lessen the value of a life, and conveniently ignored the fact that the percentages they quote represent lives lost, broken bodies and communities devastated.

The RSA said the fact remains that over the five-year period, 2008 – 2012, a total of 35 people were killed and eight were seriously injured in collisions where drivers/motorcyclists (of all vehicles) had a recorded BAC level of between 21 and 80mg/100ml (the number of people killed by drivers deemed culpable due to alcohol as a contributory factor).

The statement went on to explain their research.

There is no doubt that the measures being proposed by the minister will deter drivers from engaging in drink driving.

The role of the Road Safety Authority is to save lives and prevent injuries. The Role of the Vintners on the other hand is to promote the sale of alcohol.

But perhaps the Vintners were confused. Maybe they really didn’t understand the statistics in the RSA report. Maybe they needed some clarifications.

Which is precisely why Moyagh Murdoch, CEO of the RSA offered to go before the Joint Oireachtas Committee for Transport and answer any and all of their questions. 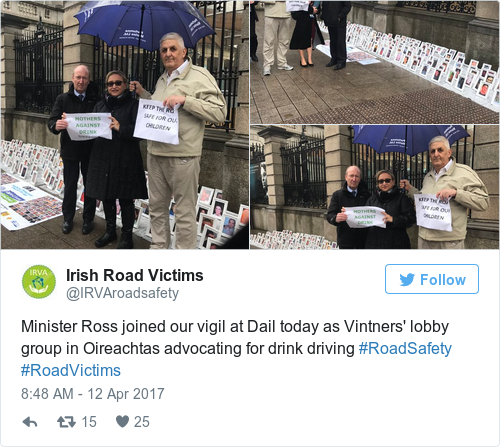 This isn’t a game. There are lives at stake here.

The RSA was very keen to go before the Vintners and clear up any misconceptions or problems or issues they have said they have with their research. For some inexplicable reason unbeknownst to me or them – their offer was refused. Why?

Are the Vintners afraid to have their views challenged by facts? Don’t they want to hear the truth of the matter? Unfortunately this would seem to be the only coherent answer.

The fact that my Bill will save lives is not a truth some vested interests want to hear – and they are going to great lengths to ensure you don’t hear it either.

Last week they sent a letter to licensed vintners saying: “We have been lobbying very hard with all of the relevant parties in relation to this piece of legislation.”

And they are entitled to do that and represent the interests of their members, which is to sell alcohol and make profits.

But before the Oireachtas committee this week, the VFI also said: “There is no evidence to support the step being proposed by the minister.”

Now, everyone is entitled to air their views, but not imagine their own facts. And the facts of this case are abundantly clear.

They are, once again for the hard of hearing:

Between 2008 and 2012, 35 people were killed in crashes where drivers/motor-cyclists had a recorded BAC (blood/alcohol level) of between 21 and 80mg (and were deemed culpable due to alcohol being a contributory factor).

Eighteen (16%) of these fatalities were killed in collisions where drivers/motor-cyclists had a recorded BAC level of between 50-80 mg.

There can be no such thing as ‘collateral damage’ where alcohol and road safety is concerned. We have the power to save lives. In all honesty – how can anyone argue with that?

Shane Ross is the Minister for Transport and Sport and member of the Independent Alliance.