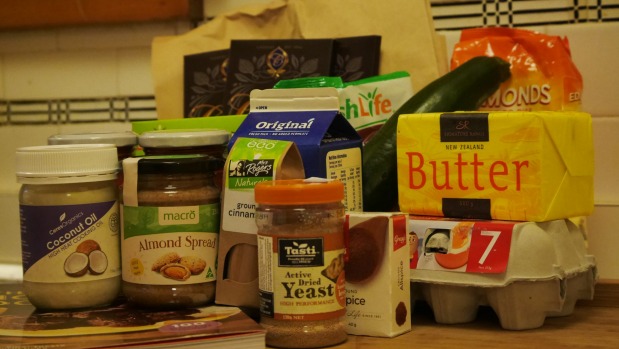 OPINION: With Easter around the corner and chocolate on the brain, it was the perfect time to trial some recipes from the latest cookbook in the I Quit Sugar series.

Sarah Wilson, the journalist behind the IQS movement, released The Ultimate Chocolate Cookbook in March – just in time to offset the traditional annual chocolate and hot cross bun-bingefest celebrating the risen Christ.

Staring down the barrel of a weekend of socially sanctioned gluttony, chocoholics on our team wondered aloud: could these sugar-free treats be as yummy as standard sugary fare?

READ MORE:* Why I won’t be quitting sugar in 2017* Nutritionist says don’t quit sugar* Should we quit panicking about sugar?

On Thursday evening, I schlepped​ to the supermarket armed with a list of words hitherto foreign to me: spelt flour, rice malt syrup, stevia. I emerged with ingredients for a flourless zucchini brownie that appears on the cookbook’s cover, a caramel slice that is one the most popular IQS recipes, and hot cross buns in which dried fruit had been sacrilegiously replaced with dark chocolate chips. It transpires that eating sugar-free is a very privileged pursuit. The supermarket shop totalled $74.09. That wasn’t including the spelt flour, which I sourced from GoodFor Wholefoods Refillery, a dinky new shop in Ponsonby Rd. Five cups of the stuff – indistinguishable from regular wheat flour – cost $10.84. I lugged the loot home, jars of rice malt syrup clinking ominously, and laid it out on the kitchen counter. Then, the real work began.

Four hours later, I had become intimately acquainted with our hot water cupboard and developed new respect for professional bakers who must proof and re-proof dough on an industrial scale. Sirs and madams of the bun world, I salute you.

I was also suffering from a combination of resentment and self-doubt, exacerbated somewhat ironically by a sugar high. It turns out rice malt syrup ($8.50 for 400g) is bloody delicious! It tastes like golden syrup, but without the sickly, charry richness. I sampled the buns first. The browned morsels had a disconcertingly wooden resonance when tapped with the fingertips. I had doubled the (85 per cent dark) chocolate in the recipe, but they still tasted a bit flat without the zing of dried fruit. Slathering them in half an inch of butter rendered them edible, however. The next day, the buns had taken on the consistency of concrete. We chiselled them in half and toasted them, chewing cautiously. A jar of raspberry jam was unearthed in the fridge, but it was too late. No-one was tempted to have seconds.

The buns proved to be the best of a bad situation. The zucchini brownie, intriguing in its use of common garden vegetable and an entire jar of almond butter ($10.99 for 250g), had a benign flavour that hinted more of the cinnamon and nutmeg than chocolate. Its cardboardy crumb prevented overindulging.

The caramel slice, whose three layers took many hours and vessels to concoct and assemble, was a crushing disappointment. The caramel sauce was a decadent menage a trois of rice malt syrup, butter and coconut cream that I had swiped out of the mixing bowl like a bear with a beehive.

But, distressingly, it did not form a pleasing, gel-like layer when poured on top of the gluten-free flour and almond meal base (which clung in the throat like greasy sand).

Instead, the caramel leaked through its container, surrounding the sandy base in a sea of good intentions. The ganache – made from coconut cream and dark chocolate – remained steadfast, a bitter reminder of what could have been.

Grumpy, I did what any sane person would do in this situation. I titled the container so the caramel would pool in the corner, and grabbed a spoon.

I am a long-time sceptic of alternative Easter treats, and Wilson’s latest litany of recipes has done nothing to disavow me of this sentiment.

I wondered whether the secret to IQS is not that it cuts calories or cocaine-like substances from our diet, merely renders once-yummy foods lacklustre versions of their former selves. It’s unappealing to overeat stuff that tastes gross – it’s why people don’t tend to binge on kale.  I will ruefully admit to having eaten entire packs of store bought hot cross buns in one sitting. Wilson’s sugar-free analogues, which take as much time as a Netflix marathon and cost about as much money as a Sunday roast, don’t spark the same frenzy. But if all you had to do to a treat food in order not to binge on it was make it taste gross, why not just drench it in vinegar? You can buy 2L from Countdown for $3.49!  For one, the ingredients seemed unnecessarily expensive. Why, for example use gluten-free flour? It isn’t lower carb than wheat flour, but it is more than twice the price. And in contrast to IQS’ commandment to “just eat real food”, gluten free flour, or my beloved rice malt syrup, weren’t exactly born that way. They’re at least as processed as the bog standard white stuff.

For another, IQS is itself a bit of a misnomer – Wilson advocates omitting specially fructose from one’s diet, but I guess “I Quit Fructose” just doesn’t have the same ring to it. Wilson, a former journalist with no formal training in nutrition or dietetics, explains fructose is metabolised by the liver, producing triclycerides (a form of fat), and claims it is addictive. She notes fructose consumption is correlated with various chronic diseases.

Maltose, found in the rice malt syrup which is prolific throughout the book, is lower calorie but has a higher glycaemic index than table sucrose (which is about half glucose and half fructose), making it unsuitable for diabetics. It’s also only about half as sweet as table sugar, yielding a product that over-promises, and under-delivers.

I asked Stephanie Brown, a registered dietician who specialises in gastrointestinal health, what she thought about IQS’ substituting fructose with other forms of sugar.

“An excess intake of all or any sugar type – fructose, glucose, sucrose, maltose, etc. – is not good for overall health,” she explained in an e-mail.

“When we eat sugar, this stimulates the pancreas to release the anabolic hormone insulin. When there is an abundance of sugar present in the bloodstream, insulin will tell your cells store this as fat.”

Wilson says the recipes in her book are meant to be eaten in moderation – the same conventional wisdom that’s drummed into us about regular treats.

I don’t see why we can’t stick with the old fashioned variety, fully enjoying them in all their sugary glory, instead of buying the sales pitch that a sliver of unappealing brownie holds the key to curbing our cravings.