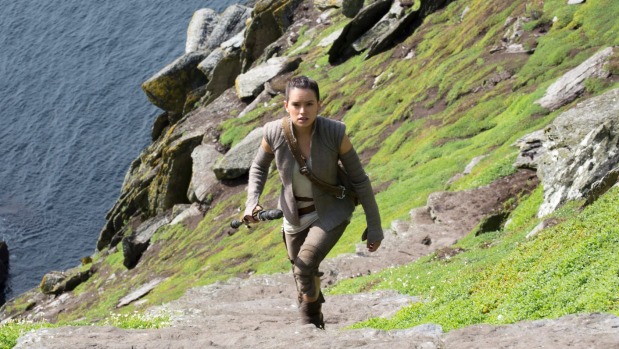 When the cast and crew of Star Wars’ Episode VIII finished filming on Ireland’s west coast, they were so taken with locals’ hospitality that they published ads in newspapers, thanking everyone for their support.

Although the shoot was shrouded in mystery, a space-age construction sparked rumours that the Millennium Falcon had, in fact, landed in Ireland’s Malin Head in May 2016.

And now, with the release of  the Lightsaber-rattling trailer for Star Wars: The Last Jedi, the spotlight is back on Ireland’s Wild Atlantic Way.

The hotly-anticapted trailer, which has been viewed more than 26 million times, shows sweeping views of the coastal touring route of soaring cliffs and buzzing towns.

Skellig Michael, an island off County Kerry’s coast, takes centre stage, picking up the story from the iconic moment in The Force Awakens, when Rey (Daisy Ridley) finds Luke Skywalker on the stoney steps.

The island has been designated a UNESCO World Heritage Site thanks to the early Christian monastery located on its slopes that’s more than 1400 years old.

The monks withdrew from society and relocated to the island to dedicate themselves to spiritual pursuits (which might also explain why the producers of The Force Awakens chose the site to be the refuge of Luke Skywalker).

The remote nature of the island and the difficulty of reaching it has meant visitors were very rare. As a result, the site is extremely well preserved.

The release of the new Star Wars film is bound to increase interest in Skellig Michael, but tourists may find reaching the craggy rock a little more difficult than simply touching a spaceship down on its shores.

Malin Head in Donegal was also handpicked to represent the planet Ahch-to in Star Wars: The Last Jedi.

John Joe McGettigan, from Carrigart, Donegal, turned up to the set in full Stormtrooper regalia, introducing himself with his rank in the Emerald Garrison of EG 1826.

“It’s absolutely fantastic … to have Star Wars in Donegal, it’s not a galaxy far, far away at all,” he said at the time.

“Everybody has their own way of going mad, this is ours.”

The stars also took some time out to show their appreciation for Ireland.