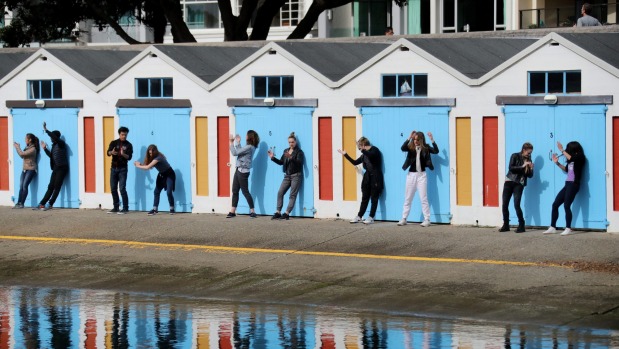 Dancing in the streets of Wellington, or on board a moving cable car, is a little different from the Royal New Zealand Ballet’s usual stages.

RNZB dancers left the stage to perform Swedish choreographer Alexander Ekman’s Episode 31 in many of the city’s notable spots,

as part of a short film for their upcoming production Three By Ekman.

Oriental Bay, Civic Squre, the Botanic Gardens and the cable car were among the sites the dancers performed at.

Spanish choreographer Fernando Troya was chosen by Ekman to teach the dance.

Troya says since Ekman created Episode 31 in 2011, the work has been performed around the world, and each time a new short film has been created.

The dancing around Wellington was on a tight schedule, but Troya says it went well. “We did everything we needed to do and Wellington is a beautiful city to dance on.”

Reactions from the public were mixed, with lots of laughs but also people avoiding the dancers.

“I think we realised Kiwi people are quite shy. As soon as they saw the camera and us walking … they would just run away, they would go somewhere else.”

Abigail Boyle, a member of the RNZB since 2005, says she is enjoying this season, as Ekman’s works are quirky, requiring dancers to use their brains as well as their bodies.

“It’s a play on performing arts, everyone takes their own interpretation home from his works …

“It’s a lot of fun, they’re big group pieces and there’s a real feeling of togetherness.”

The dancers learned Episode 31 in 10 days, but Boyle says that’s plenty of time.

“It’s our vocabulary, it’s our job. We get thrown exercises and choreography and you have to pick it up straight away.”

Their Three By Ekman production also features Tuplet and Cacti.

Troya says Ekman is very good at providing entertainment for the audience. “They will laugh, they will enjoy, they will not be bored. They will enjoy the light, the dance, the costumes,” he says.

“His style, I guess it’s a little bit crazy. It’s quite sharp, quite funny, quite dry.

“There’s a lot of dancing combined with a lot of humour and facial expressions.”

* The RNZB premieres Three By Ekman at St James Theatre from May 17-20 before touring to Auckland, Napier, Christchurch and Dunedin. Tickets from Ticketek.