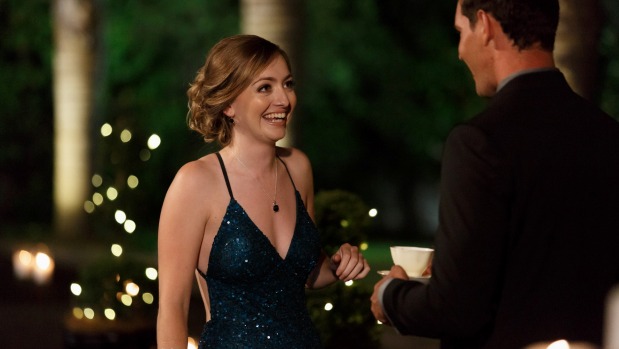 Ousted Bachelorette Rosie Woods wishes she’d handled her on-screen blow-up with interloper Karina better – but says the nation didn’t see the best of her on the reality TV show.

Woods argued with Karina over whether she should disclose to Bachelor Zac Franich that she had previously dated host Dom Bowden.

“I do regret the Karina argument,” Woods said. “I wish I had approached the situation a bit more maturely but everyone loses their cool at times, I just happened to do it on national television.

“I am happy with how I came across but I don’t think I was completely myself.

“I was quite nervous a lot of the time or I was really feisty so I don’t think it is an accurate representation of who I am”.

READ MORE:
* The Bachelor recap: Who is the girl with the sloth tattoo?
* Ex-bachelor Jordan Mauger says show wasn’t real
* Bachelor: Molly reveals what she really thought about Karina and Dom
* The Bachelor Recap: Karina reveals she dated host Dominic Bowden, and chaos ensues
* The Bachelor NZ: ‘The Mol’ not deep and meaningful enough for Zac’s liking

Despite their bust-up, Woods admitted the pair patched things up the following day.

Woods and Jessica Nutley were sent home in a double elimination in last night’s episode.

​Both 23 years-old and single, they say they went on the show for the experience and to hopefully find love.

Despite forming connections with Franich from the outset, both women felt the connection failed to grow into something stronger.

Nutley felt there was a good connection between herself and the Bachelor but it wasn’t strong enough to keep her around.

“I felt that our connection fizzled out over time because he had a stronger connection with other girls,” said Nutley.

Woods felt a similar way towards the situation, citing chemistry as the reason things didn’t go any further.

“I did feel a little bit of a connection with him at the start,” she said. “I was hoping it would grow into a stronger one and it never really did. I don’t think we had as much chemistry as he did with the other girls.”

Despite leaving the competition, both women felt positive about their experience.

Zac’s intuition was psychology student Woods’ favourite thing about him.

“I thought Zac was lovely and warm and he kind of knew how everybody was feeling,” said Woods.

For Nutley, it was Franich’s positive demeanour and welcoming smile was what she liked best.

One thing that hit the pair hard was the introduction of the intruders – three late-arriving surprise contestants – into the mansion.

“I was really shocked when the intruders came: it just threw a spanner in the works, we were all like what the hell is happening,” said Woods.

Nutley felt the same but said she had made an effort to reach out and connect with the new girls: “It wasn’t their choice to be an intruder, it could have been any of us.”

Nutley also admitted to laughing when she found out about Dom and Karina’s past romance.

However Woods felt differently about the situation which was seen when she got into a fight with Karina on TV: “I thought it was a bit weird that Karina was on the show, I felt like it wasn’t really a level playing field anymore.”

“Everyone has a past but I think it was more uncomfortable for us girls than Zac,” said Woods.

Nutley however had no regrets about her time on the show saying it was a great experience where she made life-long friends.

As for who they think will take out the competition, the pair have different opinions.

Woods thinks Nelson girl Ally will be the one to win over Zac’s heart.

“I think she is an amazing girl inside and out and I think if Zac gets to know her, he will keep her around,” said Woods.

As for Nutley, there are a few stand-outs with strong connections such as Hannah, Lily and Viarni.

Ultimately she thinks cat-crazy Bel will be the one for Zac.

“She is just so lovely, so open and she just has so much love to give,” says Nutley.