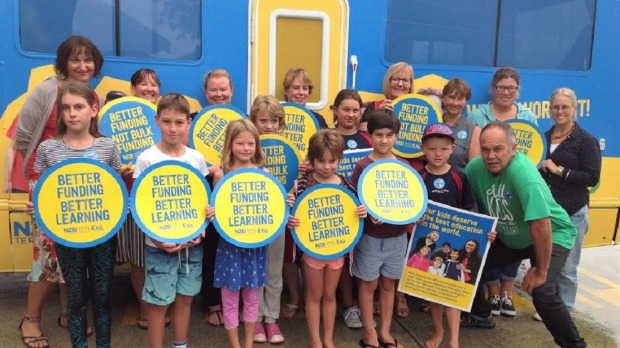 The Heartland tour is gathering momentum as it drives around the country with teachers, teacher aides and school administration staff urging local parents and families to support the call for better funding for education.

Last week the Heartland #Betterfunding battle van was in Rodney encouraging people to sign their petition which they will present to Parliament on May 1.

The north Auckland tour began at Mangawhai Beach School where they gained signatures from parents dropping off their children, and then they went off to Kaiwaka School for a morning tea meeting.

“We want to take the call for better funding for education out to small towns all over New Zealand and hear how whānau, children, and educators are coping.”

By the time the campervan got to Tomarata, principal Lynne Duffin and her staff had decked out the school reception area with #Betterfunding signage.

To end the day, they stopped off at Rodney College and Wellsford Primary School.

NZEI local President and teacher at Mangawhai Beach School, Michelle Dempsey says they had a really good response from both the staff of schools and the community.

“Lots of parents commented that it is about time Government stepped up and started funding our children’s education properly.”

“The funding freeze is really impacting on our support staff who are critical to our teaching and learning programmes. Already schools in our district are having to find extra money from the community to pay for many of the staff because there is simply not enough funding in the grant.”

NZEI members say early childhood funding has been frozen for the past seven years, on a per child basis, and core funding for many schools has been frozen this year, leaving millions of dollars fewer for children’s education when inflation is taken into account.

Already schools are planning to cut back on teacher aide and support staff hours, or to increase parent donations to cope with the funding crunch, the group says.

“Schools receive discretionary funding in the form of operational grants. It is up to them to decide the best use of that money. In 2017 just over $1.35 billion is being distributed to schools in operational grants, as well as an extra $12.3 million for those schools who have students from long-term benefit dependent families,” she says.

Parata says schools are not missing out because funding has increased at a faster rate than inflation.

“From 2010 to 2016, the cumulate increase in CPI inflation was 10.9 per cent. The cumulative increase in the operational grant funding rates over this period was 16.8 per cent.”