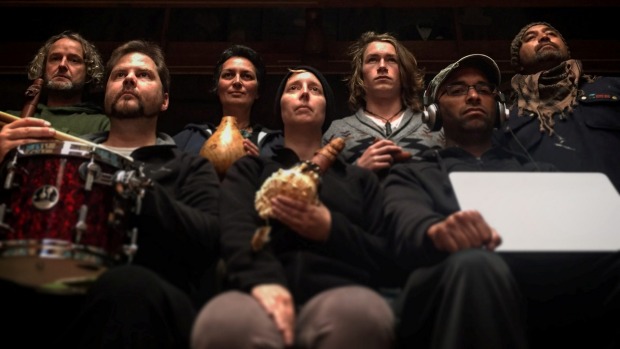 The mighty Whanganui River flooded last week and in its wake a soundscape of taonga puoro was left behind. Carly Thomas braved the rain to hear a tale as true as it is strange.

“We should have known,” says taonga puoro musician Alistair Fraser.

When a fantail entered the Koriniti Marae, flitting its tail with a distress signal and singing its top notes in contrast to the native flute’s bass line, they should have known.

Outside, the Whanganui River was rising, grasping up towards new territory, its flow quickening, its arms-reach broadening.

The group had paddled their waka on a different face of this awa (river) just days before and it had showed them a reflective, quiet smile.

Today was a new day and the river was in furious flood.

Inside the marae the group had set up a makeshift recording studio and were deep into the flow. The irony of what was happening outside started to dawn on them when a state of emergency was declared in Whanganui.

They had been here before and things were starting to come full circle in a bizarre way.

A conference run by Elise Goodge on taonga puoro was taking place in Whanganui. Musicians from throughout the country had come together to play, learn, make and inspire.

The rain came, too.

Relentlessly it fell, buoyed by its own strength, it rained and then rained some more. The group was stuck for an extra day and while the skies opened up, so did their thoughts.

Goodge says they talked about the power of the river and the effect it has on the people’s lives that live alongside it.

“Most of the time it is this benign spiritual force within the community but every now and again it reminds you who’s boss.

“We thought, ‘wouldn’t it be cool if we take our puoro that we have been making and playing and take them up the river and actually play them in that environment and take those sounds back to the river’.”

And they did, two years on and the curves of that circle are stretching out again towards an equinox.

Six musicians and an epic up-river journey. In their waka, their kete of different musical knowledge, their precious hand-carved instruments and Charles Ranginui, a man who knows the Whanganui River like a mother knows the smell of her newborn.

They set out on a river that showed them no hostility, dust motes flickered in the sunlight and the sparse clouds gave no intimation of what was brewing.

Their intention was to record and compose pieces in the natural environment using the river as a catalyst. Seeing how both wind and percussive instruments resonate in the close river valleys and the impact that water has on these sounds.

Using caves as natural amphitheatres, narrow tributaries as sound bouncers and the birds they encountered as guides, the project they named Te Pari o Auahatanga (The Flood of Inspiration) became real.

Musician and singer Ariana Tikao says they were all open to whatever was around the corner and her waiata was inspired by the bubbles in the river.

“Charles explained to us about the foamy bubbles in the river, that they are a pathway in the current and that you can learn how to read that. It make me think about memory from ancestors that we are carrying and my waiata is the river talking to the mokopuna to come back and follow the path using the best curent.”

Her song is haunting and visual, layered with taonga puoro and the silt of the river. When some earthy percussion kicks in, Tikao laughs, “Brad (McMillan) heard some Motown in there and I think he was a bit surprised when we were like ‘yeah that’s cool, let’s go there’.”

The youngest member of the group, 18-year-old music student TP Tichbon says his time spent on the river with the group was invaluable.

“I’ve tutu’d along the way and learnt so much. It’s been a massive thing for me. I have just been as much of a sponge as I could be.

“There was one part when we were all just on our waka floating, we all stopped paddling and one by one everyone started picking up instruments.”

The river carried them with its own mighty momentum and their instruments made of kowhai wood, totara, bone and pounamu found voice.

“These big, huge walls full of resonance and reverb. It was really beautiful, very spiritual.”

Matiu Bartlett agrees that it was a real moment.

“Ariana started singing and then everyone started, just to hear what it sounded like with those cliffs. It was cool because with these instruments, you don’t know what is going to come out until you play.”

Ranginui says his father, who came from “the upper reaches of the river”, passed his knowledge of the river on to him.

This trip, he pauses,  “was special, totally special”.

“Sometimes it can be so amazing on the river, early morning when the mist comes in and you can kind of imagine the old, ancient times. To hear the music with the surrounding landscape was just so beautiful, eh? Magical.”

Ranginui is a musician, too. He says it comes with the territory of being a river guide. “You become not just a guide but a counsellor, a cook, a storyteller and an entertainer. It helps around the campfire.”

His track on the album incorporates the sound of the waka paddles, a three-time rhythm that Ranginui knows well. It was a sound that was used to terrify the enemy when men would paddle en masse down the river.

And it’s a sound that the river started to mimic as it swelled. Tree trunks became weightless masses thudding against rocks, and branches cracked against the force of mother nature.

At the marae, the group was told they needed to get to safety and Goodge says they packed up the entire studio in less than an hour.

Racing against the sunset, they headed back to Whanganui.

“We were sad to leave Koriniti. It is such a beautiful place and we had been given the great honour of using the wharenui for our recording. Everything was coming together well but the river had other plans.”

Higher ground was sought out and The Savage Club Hall became their ark.

The rain continued and the recording did, too, with mixing magician Sacha Keating taking the helm.

The culmination of the ever closing circle with a raging river and relentless rain at its centre will be an album released in July.

And the watermark left on the musicians will be indelible.

The fantail turned feather and took shelter, the rain stopped at the end of that arc and the sun and the sound came back out.

In the flood’s wake, a strange tale of happenstance has arrived at the door of its beginning, and no doubt will be told for as long as the river runs deep.