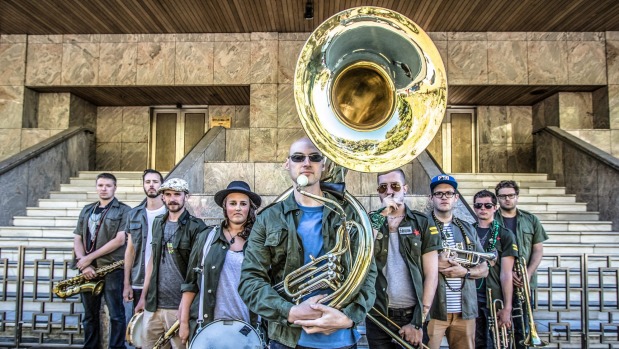 Culture reporter David James catches up with Richter City Rebels member Daniel Hayles over the phone to discuss their upcoming South Island tour and why they absolutely love playing Marlborough.

“We organised our tour around the Marlborough show,” Daniel says. “The Dharma Bums Club is such a great place to play. We’ve been looking forward to it since we played there last over summer.”

But who are the Richter City Rebels and why do they matter? Well, all nine musicians are gathered from a diverse range of musical tastes and every so often they hit the road to play their take on the New Orleans brass band style.

The Rebels are tonnes of fun to listen to and watch.

READ MORE: * Kings of comedy at Boathouse Theatre  * Ben Hurley brings his world to Marlborough  * Marlborough singer-songwriter gets backs to doing what she loves

If anyone has managed to catch a viewing of the HBO series Treme, you’ll have some understanding of the musical style and why it is infectious. It moves people. In the television show, live music represents a hopeful compass for a New Orleans’ community that has been embattled first by hurricane Katrina, then poverty and then bureaucratic neglect.

The music swaggers, it’s big and it’s bold. It’s like a hug from grandpa. The New Orleans brass band sound is a genre that is very unique to the region. But the tradition of the sound is actually a blend of military brass band, African folk music, blues and jazz. It’s the product of the ethnic and cultural melting pot that is New Orleans. It is also designed to be played in the streets – in parades or processions.

“Right from the start we wanted to start a band like this,” Daniel says. “We all listened to that style of music in high school. We’ve got some really incredibly skilled musicians; we’ve got jazz players, blues players, someone who plays Balkan folk music, and a drummer who is really involved in the metal scene.

“But, at the end of the day, it’s all about getting the audience involved and having a good time. It’s all about feeling like you’re a part of something.”

The crowds in Marlborough are great, Daniel says.

“The music we play is quite universal and crosses a lot of tastes. I think everyone usually gets something out of it. We have fans in Marlborough that come to every single gig we do there.”

The conversation again turns to the venue, The Dharma Bums Club, probably Marlborough’s most talked about (with musicians from outside Marlborough), and yet unheard of venue. Often the touring bands that I talk to gush over the secret-ish gig location.

What is it? And where is it? Well, that’s for you to find out. But a quick Google search might point you in the right direction.

Summed up, it’s an old fashioned log cabin – replete with a porch and rocking chairs – nestled in the Wairau Valley forest. But inside the quaint log cabin you’ll find one of the more fabulous locations in New Zealand to see a band.

There are wooden chairs and tables neatly co-ordinated around a stage at the back of the room and an almost faultless sound system. A dream for any music lover.

“The Dharma Bums club is really special for us,” Daniel says. “And I have talked to other bands who have played there, and they agree that it’s a really amazing place to play. When we first went out there, we were like, ‘How do people find this place; it’s in the middle of nowhere?’ But for us, it was probably one of the best crowds we’ve ever had. And the hosts there – Pete and Nancy – are really nice as well.

“There’s all this really classic South Island scenery and grassland. With an old wooden house they built themselves. We really appreciate venues like this in the South Island, otherwise we would never tour.”