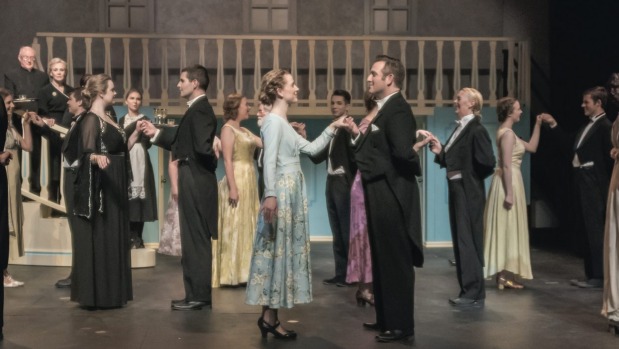 Fun fact: Did you know that in the 1930s, the real Captain von Trapp was a naval captain in a country that had zero ports? Yup, Austria lost quite a bit of stuff after WWI.

Fortunately, North Canterbury Musical Society’s rendition of The Sound of Music loses nothing on the Rangiora stage.

When I sat down for opening night, I initially had my trepidations that the small stage, almost on top of the crowd, would distract me – make it a challenge to suspend my disbelief.

But from the first note sung by the nuns in the opening sequence, that was it, I was there.

The musical direction was superb, all songs were faultless and when characters broke into song it was seamless.

I must give special mention to Shannon Peck as Maria and Phillipa Pink as Mother Abbess, whose vocal talents impressed me greatly.

Direction by Tegan Rae Patrick is on point, interactions between characters are genuine and she has clearly given actors freedom to use the small room size to full advantage.

It’s not often that you can say that small facial expressions, timed pauses and posture shifts are noticeable on stage let alone add to the scene for dramatic, romantic or comedic effect.

Gavin Hurley’s Captain von Trapp exemplifies this as, his character shifts from pompus officer and opens up as warm family man, a shift you can visually see.

The von Trapp kids are played by two groups – I saw the Strudels, and they were as good as that most delicious of German desserts.

The only niggles I had were the sort of teething issues I can attest every stage production has the first time the public gets involved.

Slight hesitations on lines, working around the mics, one or two dance moves out of place and I’m sure a stage hand dropping a silver coffee tray on sound equipment (causing them to shutdown for one silent moment) doesn’t occur every night.

Ultimately, I’m having to nit–pick to find fault. The audience’s loud applause after every song speaks volumes on its own.

NCMS’s performance of the Von Trapp saga is executed to a high level, choreography and sets are simple, restrained and perfect for the show.

The performers and direction team have been respectful to the story and keep energy high through both acts.

I give it 4.8 edelweiss flowers out of five.

I can say with absolute confidence that by the time you see it, that 0.2 of Austrian flower will have bloomed into a full 5/5.