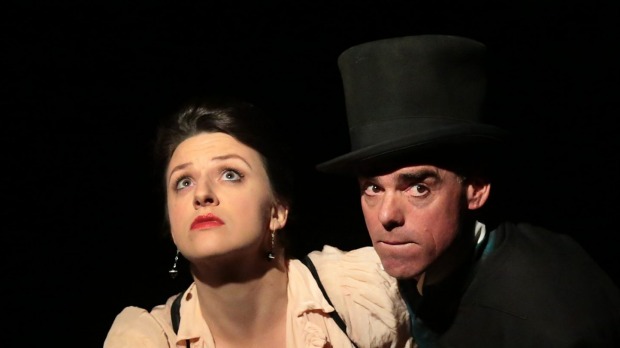 It is always fascinating to see a group develop a show around a little-known piece of history, especially when it is New Zealand history.  And of even more interest is that in the case of Rollicking Entertainment’s Mr & Mrs Alexander: Sideshows & Psychics, the focus is on the entertainment industry of the late 19th century.

Apparently, the Alexanders were a husband and wife team travelling around New Zealand performing at fairs and in country halls a series of magic and illusionist tricks with psychic transference being a major part of their repertoire. They eventually ended up in Auckland for one big final gig in the Town Hall, after which they disappeared, never to be seen again.

The lead-up to the Alexander’s rather dramatic and fascinating finale is what Lizzie Tollemanche as Mrs Alexander and David Ladderman as Mr Alexander present on stage, and very successfully.

Dressed in Victorian garb, with minimal props and atmospheric music of the period in the background, they re-create several illusionary tricks the Alexanders would have performed, often with audience participation.

It’s delivered with great confidence, not only through the pair’s acting skills but in the actual tricks themselves, handling their audience as smoothly and skilfully as they do their tricks.  And while these tricks may appear relatively simple, they are nevertheless very effective and wowed the opening night audience with no less awe than the real Alexanders must have done 130 years ago.

It’s to the credit of Tollemanche and Ladderman that they are so engaging. They play off each other well, in one moment as themselves telling the story of the Alexanders, the next being the actual pair of fraudulent tricksters wooing their gullible audience.

To describe the detail of each trick would be to take away much of the anticipated outcome of each, particularly the ending.  And likewise, trying to work out how each is done is a pointless exercise. Rather it is best just to sit back and be entertained by a pair of consummate performers who have created a most unusual and original show that is also very entertaining.

Circa Theatre, Wellington, to May 6.