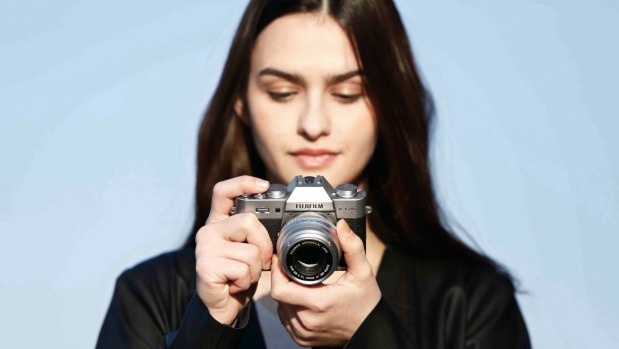 The thing I dislike most about my camera is its large size.

Its bulk means I often leave it at home when venturing out and end up missing photo opportunities. But technology is helping to shrink cameras while making them almost as powerful as those used by professional photographers. These mirrorless cameras can be up to half the size of their DSLR siblings, and while they lack in a few areas, they are a good option if you want a lightweight camera capable of taking great images and video. There are several to choose from, including cameras from Sony, Panasonic, Fujifilm, Olympus, and Canon.  Fujifilm’s offering is the X-T20 which was recently released in New Zealand. The body and 18-55mm kit lens cost $2430.  It’s a petite camera weighing 383 grams, small enough to fit in a jacket pocket if paired with a pancake lens. However, it has a lot of power packed into it with all the features you need to progress your photography.  All cameras now are capable of producing excellent images, and this makes it hard to choose a camera to buy.

The first and most important reason is that it’s easy to use.

The best cameras are the ones that have a design that makes you want to use it and gets you excited about taking photos or recording video.

A big part of this is how you interact with the camera, especially when adjusting the most common functions such as shutter speed, aperture, and ISO.

This is done on the X-T20 by using physical dials rather than changing settings on a screen. There’s also a switch for changing your focus from single shot to continuous. And if you want to adjust your frame rate (how many pictures you take per second) then, you guessed it, adjust another dial.

I found it took a while to get used to the dials but after a few days, I found I preferred it to how my current camera works.

Fujifilm also tries this simple approach with its other features. For example, it has two on-screen menus where you can save your most commonly used features.

But the most blatant example is the Auto switch. Just flick this on and point and shoot with your camera. While experienced photographers may look down on using a camera in this way, it’s great for those learning or anyone who has a brain freeze when quickly trying to capture a moment.

But when you dig deeper into the X-T20 you can find some high-end features such as 4K video, a touchscreen and the ability to let you set how you track a moving subject.

This mix of simple and high-end makes this camera appealing. It means aspiring photographers can access more features as they progress.

However, the most important thing about a camera is its ability to take high-quality images and video (though the key to good photography lies with you, not the camera).

The X-T20 can produce beautiful photos and footage. It does this by having nearly all the same tech from the professional-level cameras in Fujifilm’s range.

It has a 24MP APS-C sensor, which is the same physical size found in enthusiast-level DSLR (digital cameras that use a mirror) cameras made by Canon and Nikon.

It can also use the same Fujifilm lenses as those on its pro-level camera. This is an important point as some camera systems have two or three different lens mounts so you can’t use just any one you like.

Adding to this is that its lenses are highly regarded by reviewers.

The X-T20 faces stiff competition in this market of small, reasonably affordable mirrorless cameras. Canon (M5), Sony (A6300) and Panasonic (G85) all have good cameras, all with different strengths.

Another positive thing about Fujifilm is that it’s got an engaged online community, which is handy for learning about your camera and gleaning tips and tricks.

If you are looking for a new camera, then read reviews and visit your local camera store. This last part is important as it’s good to handle a camera before you buy.

Part of the reason to make this visit is that this style of camera is quite small. I found the X-T20 hard to hold solidly but you can buy a grip that makes it easier to wield.

But that’s the compromise you make for such as portable device. Its petite size makes it light and easy to carry around while out and about or travelling, which is the whole point of a camera like this.

I really enjoyed using X-T20 and the features and tech packed into its small body are more than enough for any photographer to produce great images and video.