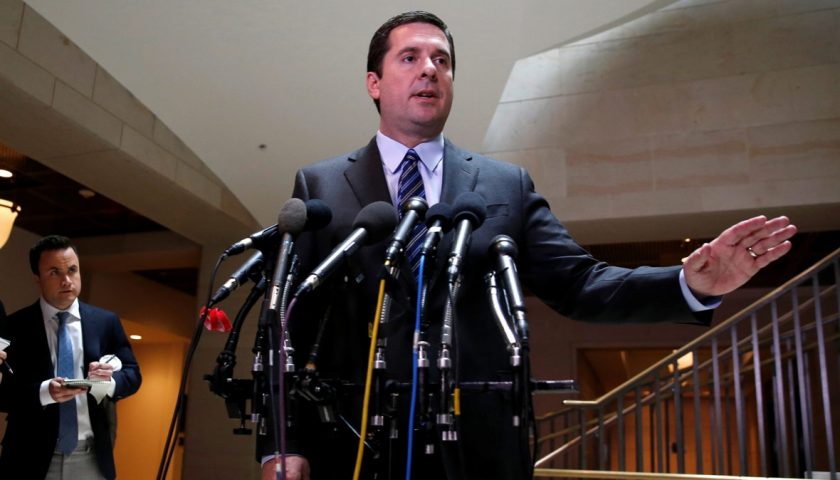 The unmasking process is nowhere near the most privacy-intrusive risk to NSA’s spying.

They say a conservative is a liberal who has been mugged. From recent news, you’d think a civil libertarian is a conservative whose buddies got swept up in spying.

What else might explain the dramatic change of heart on the part of people like California Rep. Devin Nunes, who for the last several years as chair of the House Intelligence Committee has led the fight to defeat sensible reforms to the government’s spying programs? Nunes and other close allies of the Trump administration have spent weeks complaining that Obama national security officials reviewed communications that Michael Flynn, who served briefly as Trump’s national security adviser, and others had with foreign spying targets. Last week it exploded into an attack on former National Security Adviser Susan Rice for requesting the unmasking of “at least one” Trump transition official. By Tuesday, however, other members of Congress who reviewed the documents contested Nunes’ depiction of them.

I’ve been arguing for surveillance reform for years now, and it’s tempting to welcome converts to the cause. According to Republicans like South Carolina Rep. Trey Gowdy and Florida Rep. Tom Rooney, who have taken over the House investigation now that Nunes has stepped aside, what happened to Flynn, isn’t just offering everyone an education about how our surveillance actually works. They say it threatens the re-authorization of the FISA Amendments Act, which will expire in December.

But there are several reasons why civil libertarians should not just welcome the outrage sown by Trump’s propagandists. Most obviously, the Trump associates who are upset about spying haven’t made any commitment to rein in surveillance. On the contrary, even as Trump wails about being tapped, Republicans moved to overturn Obama broadband privacy rules, which will make more data available to the nation’s spies and law enforcement. More troubling still, Trump’s Department of Homeland Security is contemplating asking foreign travelers to the United States for their social media and mobile passwords. And weeks before the Washington Post reported that Trump campaign foreign policy adviser Carter Page was (or is) being surveilled as a suspected agent of Russia, the White House called for a clean re-authorization of the FISA Amendments Act, which permits warrantless access of Americans’ communications.

And those complaining about the alleged spying on Trump associates aren’t even hiding how narrow their concerns are. Nunes has repeatedly likened this episode to one that occurred during negotiations over the Iran nuclear deal last year. In targeting Bibi Netanyahu, which is pretty standard, the NSA collected conversations between the Israeli prime minister and members of Congress working to defeat the deal. While public reporting said no members of Congress’ names were unmasked, the incident nevertheless led to strengthened notice requirements when the intelligence community collects details of the communications of members of Congress.

Even while negotiating those protections for Congress, Nunes and others have been vastly expanding spying within the executive branch in a thus-far failed attempt to stop mass leaks like the ones carried out by Chelsea Manning, Edward Snowden, and (most recently) the Vault 7 CIA hacking documents to WikiLeaks. If Nunes truly believes that security clearance–holders in the executive branch should have every phase of their lives open for scrutiny in the name of counterintelligence, why should the scrutiny of (as distinct from the leak about) Mike Flynn should be any different?

But by far the biggest reason to be skeptical of this newfound concern about spying is the way Trump associates’ complaints have muddled the real debate about surveillance. They’ve been concerned about the process by which Americans’ names get masked in individual finished reports on legitimate intelligence targets. They have two complaints: First, that the substitutions used to hide Americans’ names make the U.S. person’s identity too obvious. For example, leaked Edward Snowden documents show that Barack Obama’s name was replaced with “President Elect” in 2008. They also complain that the unmasking process—whereby a “customer” like Rice asks an agency to reveal the American name included in a report—permits abuse, though that agency decides whether the request is proper.

The Trump outrage has focused the debate on unmasking. But as a series of disclosures have made clear, the NSA, CIA, and FBI can also access Americans’ communications another way: by searching on their name or communications identifiers, like their email address, in databases of raw data. While the rules limit what the NSA and CIA can do, the FBI routinely searches Americans’ communications among previously collected data, even in cases that have nothing to do with national security, and even before the bureau obtains solid evidence of wrongdoing. It appears that if such people get charged with a crime, they almost never get the “notice,” required by law, that FISA was used. Such searches, then, and the way such searches get hidden from defendants provide the FBI with a way to search on Americans’ communications without a warrant or even probable cause.

Consider how this might have worked with Flynn. There were several reasons the FBI might have started investigating the retired general, including his conversations with Russian Ambassador Sergey Kislyak about ending sanctions or his failure include Russian payments on clearance forms. If at that point the FBI searched its raw databases for Flynn’s name, as is routine, it might have discovered previously unknown details about discussions Flynn had with Turkish officials about rendering opposition leader Fethullah Gulen, who is currently living in the United States, all without a warrant or specific knowledge of that meeting.

Moreover, such back door searches, as opposed to unmasked conversations with top foreign officials, are more likely to affect less powerful people like immigrants from Middle Eastern countries or China. The House Intelligence Committee chair isn’t going to conduct a campaign politicizing such spying.

By all means, let’s use the Trump fuss about spying to foster a discussion about so-called “incidental” spying that collects the American side of a conversation with a targeted foreigner without a warrant. Let’s be honest that “incidental” spying—to identify potential spies or terrorists collaborating with foreigners—is a big part of the point of the spying.

But let’s not let political expediency completely muddle that discussion and, in the process, misrepresent where the greatest risks in America’s spying programs lie.

This article is part of Future Tense, a collaboration among Arizona State University, New America, and Slate. Future Tense explores the ways emerging technologies affect society, policy, and culture. To read more, follow us on Twitter and sign up for our weekly newsletter.