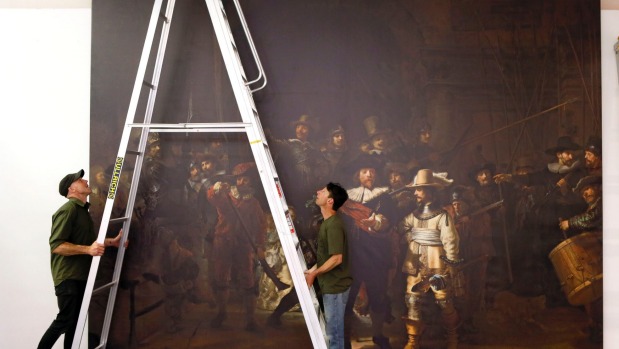 These are some of the places you will need to travel to if you want to see an original Rembrandt.

Rembrandt created 350 paintings in his time and they are now far flung. Many are hung high on private walls, others in galleries. Some have been stolen.

Rembrandt’s paintings appear to like to live alone and are spread over 18 countries. It would be an incredible trip and a commendable feat to see all of them – a grand and epic adventure that would take some daredevil can do and some highly attuned negotiating skills.

Or you could just go to Palmerston North’s Te Manawa.

Albeit they aren’t the real thing, but Rembrandt experts have worked for many years to bring an experience of Rembrandt to people that might never get the chance to see one, let alone 57.

The digitally re-worked paintings are presented in their original size in Rembrandt Remastered and the aim is to show people what they may have looked like when they left the master’s studio nearly 400 years ago.

You can get close. You can look as long as you want and you won’t have to negotiate with a countess to see her Self Portrait with Beret.

The exhibition has, however, copped flack and in a recent review Manawatu Standard contributor Fran Dibble took issue with the fact that Rembrandt’s paintings have been copied, digitally reproduced and then hung on the wall as art.

“Rembrandt himself hasn’t been playing with the colour dial, which in many of the works looks set quite high, so is it right to represent them using someone else’s interpretations?”

Dr Erin Griffey, the curator for Rembrandt Remastered’s New Zealand tour, is the head of art history at the University of Auckland and is the foremost specialist on Rembrandt in Australasia. She is kind of like the exhibition’s “interpreter” for this part of the world and says she would be the first to admit the exhibition “has its limitations”.

“They aren’t paintings. Rembrandt paintings have a beautiful patena to them, a beautiful surface texture. What we have gives you those painterly effects, but at the end of the day, it is on a flat surface. People can be snobby about this, but the project recognises its limitations. These are not the originals and they are not better than the originals.”

But, she says, they have real value to the public, giving people a chance to see images they have only perhaps seen in books right in front of them “in a proper scale”.

Griffey has spent many years studying Remrandt and says, as an academic well versed in the Dutch painter, by having the exhibition in front of her, with all those paintings in one place, she has learnt something.

“I have been able to notice things that I haven’t noticed before because I am seeing a sort of conversation come up between different artworks being all together.”

The exhibition has definitely also started rumination about what it means to make copies and if it is art.

Dibble says she was “unnerved” by the exhibition’s re-jigged version of Rembrandt’s most famous, Nightwatch.

“I saw the real thing once when I was in Amsterdam, in a gallery full of natural light, and remembered how beautiful the work was. There was something harmonious about the composition and the easy paintwork that flicked light throughout the work.”

But the digital reproduction didn’t sit well with Dibble. “It reads like signage, not artwork – a giant advertising banner”.

Griffey see’s it differently. She says you can walk into the room and realise, because of the scale, that the painting really is immersive. “It takes up a whole wall and you feel like you are apart of it, so we engage with it in a different way than if it were scaled down.”

And as Griffey points out, The Night Watch is so valuable it will never travel, so this is a way to let people see and stare and wonder at the man who painted the way he did all those hundreds of years ago.

He wasn’t the norm for his time. His self portraits were without vanity. They were frank and honest inward glances at the man he saw in himself.

He had empathy, says Griffrey, and you can see that in his “expressive paintwork”.

“In the 17th century, most painters just specialised and did one type of artwork, so they would just do ships, or they would just do landscapes. Rembrandt was different from the outset. He did a bit of everything. The breadth and depth to his career is unique for that time. And as a painter he really probed big universal themes of betrayal and regret and triumph.”

So, yes, there are a few options here. Go to Europe, America, Australia, go on a beautiful, bank-draining voyage of Rembrandt discovery. See the paint layers, the brush strokes, sense the blood, sweat and masterful tears that went into the originals. Or, take a look in your lunch hour at some copies, with a heap of science behind them, right here in town.

Rembrandt Remastered is on at Te Manawa till the end of the month.