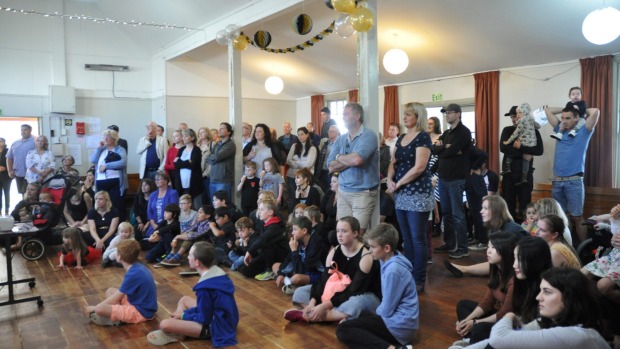 It was a case of art imitating life with those behind a new Heart Kids Wellington awareness film faced with unexpected challenges at every turn.

But, like the children at the heart of the charity, those behind the production persevered, with the end result, Every Beat of Life, screening at a red carpet event in Seatoun.

The two-minute short film was made in partnership with Film for Change Aotearoa to show what it is like for children and their families to navigate life with a congenital heart disease.

“This film represents us, it represents what we go through on a daily basis and the day-to-day things families have to go through,” Heart Kids Wellington chairman James Lawler said.

READ MORE:
* Little battlers: Heart surgery at 5 days old
* Wellington mayor Justin Lester chills out for cause close to his heart
* Living with a pacemaker since she was 4-months-old
* Positive future for Auckland teenager who had pioneering heart surgery

Despite the film being only two minutes  long,   committee member Angela Haddon said it would be a powerful tool for the organisation to have at its disposal.

“It’s an important story to tell because there are a lot of children out there with heart conditions so we’re hoping to show it at schools, hospitals and basically anywhere that has a screen.”

The organisation, which receives no government funding, supports more than 400 families in the region with approximately two children born each week with a congenital heart defect.

“As a heart parent or heart kid you look at things slightly differently. You understand that life is worth celebrating and every beat of life counts,” Haddon said.

T Due to a handful of unforeseen challenges, production took a lot longer than expected.

“We started in January last year, conceptualising the film with the intention of shooting straight away but we had to stop part-way through because of funding,” producer Shu Run Yap said.

“We had to shoot in a hospital so we wanted to do it right and be able to afford to bring in extras and get the right lighting.”

Once additional funding had been secured  through a number of avenues, including Rotary, Yap was able to fully focus on producing the best product.

“It’s the story of a baby going through all the stages of life and I thought the best way to convey that was to show the audience moments in their life, from a toddler in a hospital bed to an adult on their wedding day. It’s snapshots of life.”

The film has no dialogue – a stylistic choice that was agreed upon at the start of the project with the emphasis put on visually showing the challenges of having congenital heart disease.

“For us, the idea has always been that we champion other people’s stories which is why our clients are so central in the story-making process,” Yap said.

“The story needs to work for them because at the end of the day I want to let go of the project and say ‘this is your baby and I hope it works for you in every way’.