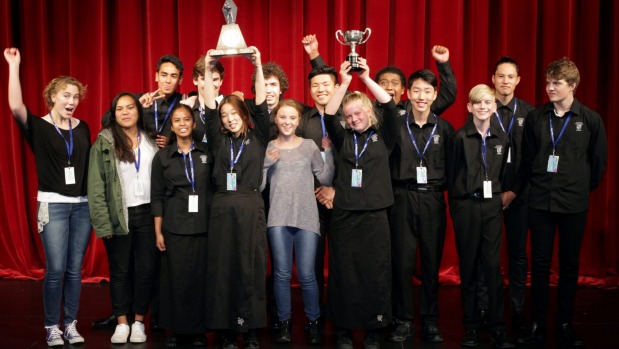 The competition held during Easter weekend, was a part of the National Jazz Festival at Tauranga and Pukekohe High School’s stage band scooped four awards overall.

Band member Ben Frater was also named the most outstanding drummer at the competition.

Bands from across the North Island performed at the competition which was held at the Baycourt Community and Arts Centre in Tauranga.

Although Cyclone Cook caused a reshuffle of the competition schedule, Pukekohe High School’s stage band was still able to walk away with the top prize.

Pukekohe High School musical director Niels Leffelaar said the band lost a lot of experienced members from last year, so the win came as a surprise.

“It was pretty unexpected to be honest…it really was a rebuild.

“I’m really proud of the band and how they stepped up.”

Leffelaar has been in charge of the jazz band for the past 19 years.

One of the keys to the band’s success was their hunger to perform well, Leffelaar said, and to uphold Pukekohe High School’s reputation at the competition.

“There’s a strong tradition of success and nobody wants to let that tradition down.”

The band performed Arnge Drank, a piece of music which was challenging to learn in five weeks, Leffelaar said.

However, hours of practice helped to fine tune the performance as did performing at different school events.

“I try to encourage them to enjoy it – we’ve got to go out and smile,” Leffelaar said.

“The thing that makes a good jazz band is playing the nuisances in the music, what makes jazz is the creating the swing feel.”

“We had more bands registered than we have ever had – it’s just such a shame that the weather didn’t co-operate.

“The bands that performed really brought their A game and set a new benchmark for excellence.”