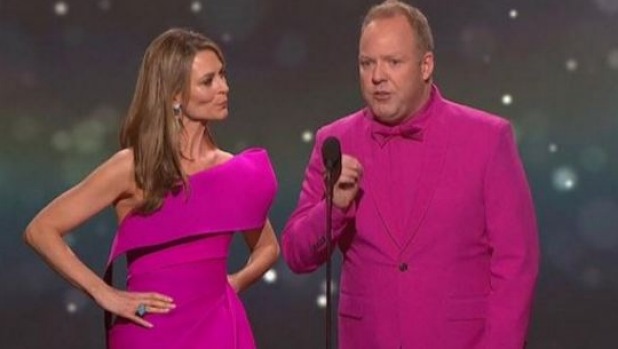 One of TV’s most hilarious moments from 2016 played out in front of viewers of Australian TV’s Logie Awards when comedian Peter Helliar and actress Kat Stewart presented the Logie for most outstanding comedy – while wearing matching outfits.

Stewart was dressed in a beautiful fuchsia gown, while The Project host wore a striking suit in the same colour.

“I’m sorry, I’m sorry, you need to change, can we get wardrobe?” Helliar asked Stewart on stage. “I asked you two hours ago, I asked you specifically not to wear fuchsia. You need to put a jacket on.”

“I’ve been flat out, I haven’t had time,” a flustered Stewart replied.

“I told you two-and-a-half hours ago we can’t both wear fuchsia, it looks like we are trying to land aircraft.”

To which Stewart responded: “If it’s an issue…”

“It is an issue,” Hellier snapped.

After trading a few more barbs, Hellier suggested his co-presenter don a poncho in order to disguise the matching outfits.

“Why can’t you wear it?” Stewart asked.

“But you’re not going to win.”

The pair then exited the stage and started their routine again.

“Of course, I need to ask, who are you wearing?” Helliar asked, a knowing reference to the #AskHerMore campaign over sexist questions on red carpets.

“It’s Poncho Playhouse,” she replied. “Who are you wearing, Pete?”

Amber Sherlock, who “couldn’t shy away” from wearing white to the Logies, took the skit in her stride.

After comedian Peter Helliar roasted Sherlock, he managed to take a cheeky snap with the television anchor.