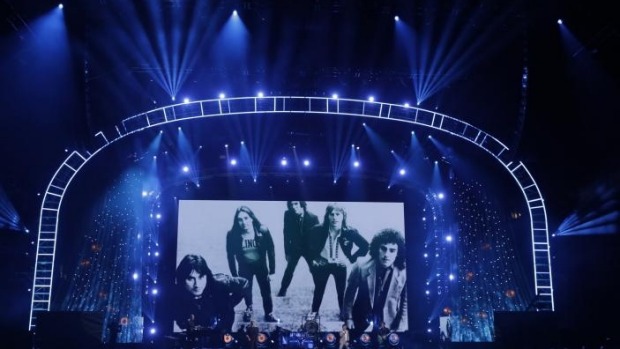 Pearl Jam, Journey and Joan Baez were among the 2017 class of Rock and Roll Hall of Fame inductees honoured in a megawatt ceremony at the Barclays Centre in Brooklyn on Friday night.

The other new initiates were Nile Rodgers, Tupac Shakur and Electric Light Orchestra, which kicked off the evening with their version of Roll Over Beethoven, an homage to the father of rock and roll, Chuck Berry, who died last month.

Leading up to the show, rumours swirled that former Journey singer Steve Perry would perform with the band for the first time in more than 20 years.

He did not. But Perry did join his former bandmates onstage to accept the award, recalling that before he joined the group, he’d watch them with awe during performance in Los Angeles.

“These guys have the most amazing musical ability,” he said. “I’ve never seen a band like that in my life.”

Bob Dylan appeared on video to pay tribute to a fellow folk singer.

“Joan Baez, she was staggering,” he said. Not surprisingly. Baez took her moment with the microphone to send a political message.

“We the people are the only ones who can create change,” she said. “I’m ready. I hope you are too.”

Baez later brought Mary Chapin Carpenter and the Indigo Girls on stage to join her in singing, The Night they Drove Old Dixie Down.

In the induction speech honouring Yes, Rush singer Geddy Lee said that seeing the band perform live in 1972, “changed the way I played and listened to music forever.” He then joined Yes for a set that included Roundabout and Owner of a Lonely Heart.

“While many of you remember him now as some kind of thugged-out superhero, Tupac knew he was only human.” said Snoop Dogg.

“It’s a fact that he never shied away from. He wore it like a badge of honour.”

(Snoop Dogg also mentioned that it was Tupac who gave him his first blunt. “That’s right,” he said. “Tupac is the one that got Snoop Dogg smoking blunts.”)

“I was just a little kid on the side of my bed just playing guitar hoping to get one hit record,” Rodgers said in his acceptance speech.

“Yo, it’s $3 billion dollars now. Yeah, they just told me a couple of months ago that I’ve sold over 300 million albums and 75 million singles. I just wanted to have one hit record.”

Lenny Kravitz brought out a gospel choir to help him offer up a powerhouse tribute to his friend Prince, with electric renditions of When Doves Cry and The Cross.

In the end, the night belonged to Pearl Jam. David Letterman inducted the band, which had appeared on his late night show seven times.

“These guys in Pearl Jam were something more than a band,” said Letterman. “They’re true living cultural organisms. They would recognise injustice and they would stand up for it.

“Whether it was human rights or the environment. Whether it was poverty. They didn’t let it wash over them. They would stand up and react.”

Letterman closed by reading a letter Eddie Vedder had given him to give to his son, Harry.

“Hi, Harry. My name is Eddie Vedder and I’m a friend of your dad’s. I wanted you to have this small guitar to start with.

“Try it out, make a little noise, I’ll make you a deal. If you learn even one song on this guitar I’ll get you a nicer, bigger one for your birthday. Maybe an electric one. You let me know.”

The sold-out Barclay centre roared with applause when Pearl Jam finally picked up their instruments to perform.

They started with Alive, before moving on to Given to Fly, Better Man and Neil Young’s, Keep On Rockin’ in the Free World.