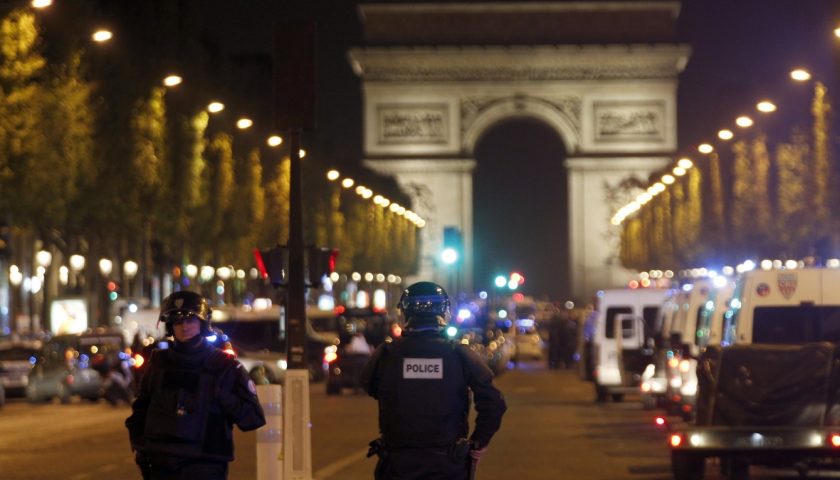 The so-called Islamic State claimed responsibility for the attack, which has occurred just days before a crucial French presidential election.

A KNOWN TERROR suspect shot dead a French policeman and wounded two others on Paris’s Champs Elysees in an attack claimed by the Islamic State group days before a presidential election.

Observers had long feared bloodshed ahead of this weekend’s vote in France following a string of atrocities since 2015 and the violence is likely to thrust security to the front of voters’ minds.

The attacker emerged from a car and used an automatic weapon to shoot at officers outside a Marks & Spencer’s department store at the center of the Champs-Elysees at around 8pm (Irish time).

After killing the officer and injuring his colleagues just a few hundred metres from the Arc de Triomphe, the gunman was shot dead in return fire while trying to flee on foot, police sources told AFP.

The Islamic State group’s claim of responsibility just a few hours after the attack came unusually swiftly for the extremist group, which has been losing territory in Iraq and Syria.

The killer, identified as a 39-year-old Frenchman, was known to anti-terror police, sources told AFP, and raids took place at his address in a suburb to the east of Paris.

He was arrested in February on suspicion of plotting to kill officers but was released because of lack of evidence.

He had been convicted in 2005 of three counts of attempted murder, with two of these against police officers, sources said.

The impact on the outcome of the French election is unclear – Sunday is the poll’s first round – but far-right leader Marine Le Pen, her centrist rival Emmanuel Macron, and scandal-hit conservative Francois Fillon cancelled campaign events planned for today.

Up until now, surveys showed voters more concerned about unemployment and their spending power than terrorism or security, though analysts warned this would change in the event of violence.

French President Francois Hollande promised “absolute vigilance, particularly with regard to the electoral process” and paid tribute to the police.

Hollande, who said he was convinced the shooting was a “terrorist act”, cancelled a trip to Bretagne and will chair a security cabinet meeting today.

Anti-immigration contender Le Pen earlier welcomed security moving to the heart of the campaign as she took part in a prime-time interview show alongside 10 other presidential candidates.

“We are suffering the consequences of a laxity that has continued for years,” she said shortly before the shooting, promising to take a hard line against extremists and anyone suspected of being an Islamist.

For weeks, former banker Macron and Le Pen have been out in front but opinion polls now show there is a chance that any of four leading candidates could reach the election’s second-round runoff on 7 May.

“The first responsibility of the president is to protect,” Macron said on the interview show. “This threat will be part of our daily lives in the next years.”

Fillon, who penned a pre-election book called “Beating Islamic Totalitarianism”, declared that “the fight against terrorism must be the absolute priority of the next president”.

As the first details of the attack filtered through, US President Donald Trump said that “it looks like another terrorist attack. What can you say? It just never ends”.

US Vice President Mike Pence told business leaders during an official visit to Indonesia that the Paris assault was “the latest reminder that terrorism can strike anywhere at any time”.

The bustling Champs Elysees lies in the heart of Paris and is lined with shops and restaurants. It was immediately blocked by armed officers after the attack and nearby metro stations were closed.

“We had to hide our customers in the basement,” Choukri Chouanine, manager of a restaurant near the site of the shooting, told AFP, saying there was “lots of gunfire”.

A spokesman for the interior ministry paid tribute to the fast reflexes of police at the scene who managed to kill the gunman and prevent further bloodshed on a busy spring-time evening.

A foreign tourist was slightly wounded in her knee by shrapnel during the shooting.

France is in a state of emergency and at its highest possible level of terror alert, with jihadist-inspired assaults killing more than 230 people in recent years.

The Charlie Hebdo magazine was hit in January 2015, sites around Paris including the Bataclan concert hall were targeted in November the same year, and families at a fireworks display in Nice in July 2016.

Thousands of troops and armed police have been deployed to guard tourist hotspots such as the Champs Elysees or other potential targets, including government buildings and religious sites.