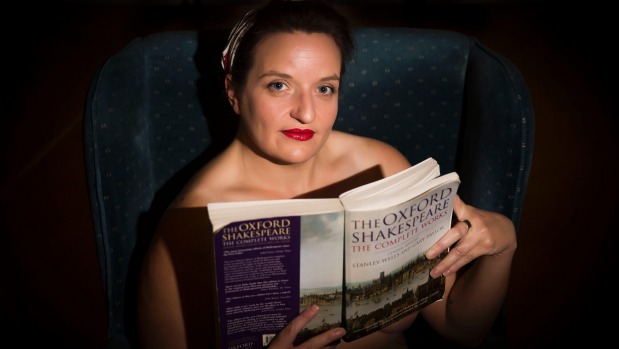 Standing in front of an audience stark naked may sound like a nightmare to some, but for one Palmerston North woman it’s a chance to normalise the female body.

Hannah Pratt will bare all to bring an audience tales of Winnie the Pooh, Game of Thrones and poetry.

She is part of a Naked Girls Reading show, which aims to get people past the nudity and push them to focus on the literature being read.

Pratt said it would be challenging, even for her having paraded on stage in her underwear before, but the “40-year-old, plus-sized” performer wants to encourage women to be comfortable with their bodies.

“The thing that sold me was a review that said, ‘for the first ten minutes I felt uncomfortable with the nudity, but then very quickly I was engaged with the literature’.”

Pratt expected that the audience would be just as nervous to begin with, but once they realised it was “just a naked body” the fun of hearing the  fantasy tales and poems would become the focus.

It was about shifting the idea that a naked woman was a “sexy taboo” and instead making it something “ordinary”.

The perception that a woman’s body was “taboo” was also a challenge in other aspects of life, such as breastfeeding, Pratt said.

It was sad that some women felt that they could not breastfeed in public, she said.

Producer and MC Genevieve Fowler said once people got past the fact that the readers were naked, it was all about having someone read to other people – which didn’t happen often anymore, Fowler said.

​Fowler looks for performers of all ages and professions to steer clear of only showing the “18-year-old white, skinny, burlesque performer”.

The show is on at The Fringe Bar in Wellington on Saturday, but Fowler said Palmerston North was on the top of the destination list for upcoming shows.

“It’s got an amazing creative community.”