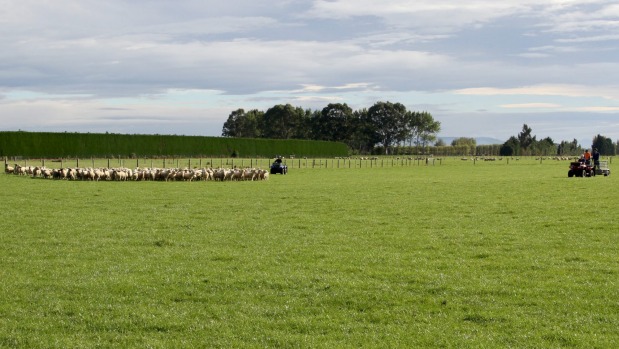 A line of three quad bikes travel down a small country lane, sheep dog Flynt nip barks in anticipation, it’s just another day in the classroom.

Students of the YMCA educational programme Y-Rural have swapped their classrooms for sheep paddocks, stock yards and quad bikes.

The programme, which the YMCA has run for five years, is part of a national pathway into farming skills.

Student Kyan McCormack, 16, dreams of managing his own farm one day.

The research farm wasn’t what he expected, and he was surprised when he turned up on his first day and saw a flock of sheep.

“I was hoping for cows.”

It didn’t take long for him to learn about one of the biggest mistakes made on the farm – gate control.

There was nothing worse than finding out someone hadn’t closed the gate properly and a flock of lambs was heading into the wrong paddock.

After 10 minutes of trying to herd a flock of skittish lambs somewhere they don’t want to go, leaving a gate open became a mistake you only made once. “It’s so frustrating.”

YMCA tutor Suzzy Thomas said the programme was about getting young people involved in the farming industry and helping educate students who found it hard to conform to traditional education in a classroom.

Students are collected each morning in the YMCA van and driven out to the Winton A and P research farm.

The class was responsible for a flock of 800 breeding romney and suffolk-cross ewes and 12 rams.

There were no short cuts or ways to fast track the course with each student having to work on the farm for four seasons.

“Farms are seasonal, and there are things we can only teach them during a particular season, a season is not something you can really replicate.”

Unlike traditional school programmes with a clearly defined beginning and end, Y-Rural took students all year round.

“It doesn’t really matter when they start or finish as long as they have worked four seasons.”

Farm manager Kane Gillan said the farm brought out the best in the students.

“They may not of been the perfect kids in the classroom, but out here getting amongst it on the farm they are thriving and seem to really respect the opportunity they have been given.”

“They’re good kids and really keen, which is cool to see, I really enjoy my time with them.”

Practical education was invaluable within the agricultural industry, he said.

After four seasons on the farm they knew what was expected of them day to day and had a good work ethic.

“At the end of the course, I think the students will be a great asset to the farming community.”