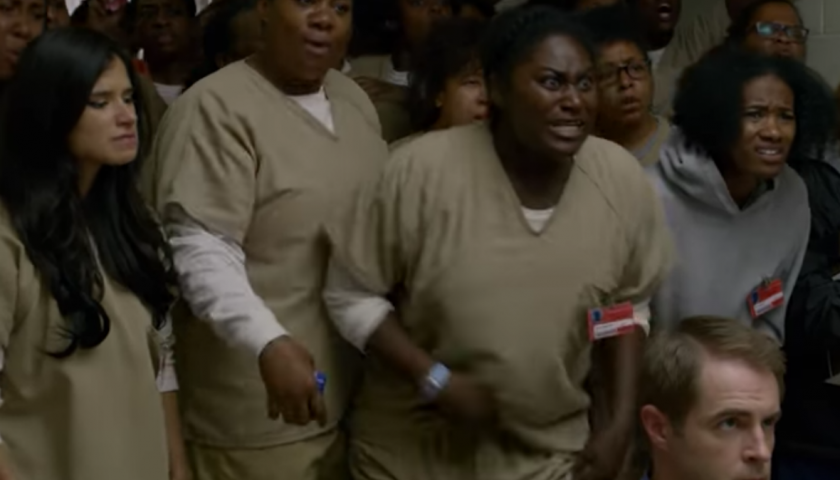 Spoilers ahead for the fourth season of Orange Is the New Black.

Orange Is the New Black appears to be wasting no time after ending Season 4 on its biggest cliffhanger yet. A first look at the fifth season picks up exactly where we left off—with a gun in Daya’s (Dascha Polanco) hand, aimed precisely at prison guard Thomas Humphrey (Michael Torpey), with inmates surrounding her, chanting loudly and indistinctly. It was a fittingly chaotic moment to end the tragic, dark, and excellent fourth season of Jenji Kohan’s acclaimed series on—and if this brief teaser is any indication, it looks like the cliffhanger might just pay off with a bang.

Conceivably, the first look could serve as the new season’s opening minute, with Piper (Taylor Schilling) and Alex (Laura Prepon)—who were away from the scene at the time—wandering through the prison halls until they finally catch a glimpse of the chaos, and Daya, in what could turn out to be the most consequential moment of her life, trying to center herself amidst the screaming, and figure out what to do. It’s an unbearably tense introduction to the new season, so tense that it ends with the abrupt sound of a gunshot just after the video clip cuts out. Whatever this means for the show’s narrative, exactly, it’s certainly an ominous sign of things to come.

Orange Is the New Black returns to Netflix on June 9.