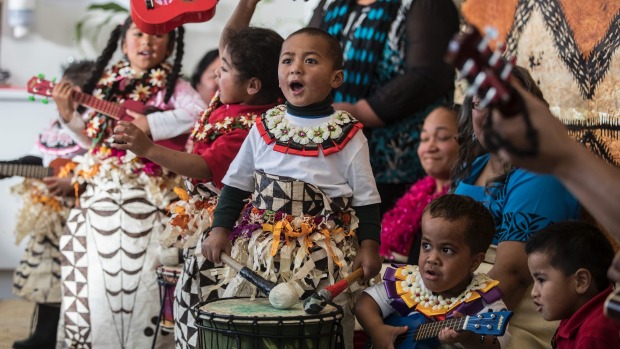 Two weeks after starting preschool, 18-month-old twins Oak and Marco are crying out to get there in the mornings.

Christchurch mum Shannon Moevao said the boys needed stimulation but she had been holding out for “a more cultural type of centre on this side of town”.

“When this place opened it was just, like, yes. As soon as they come here, they’re happy as.”

Moevao was among about 200 educators, community members, and dignitaries at the official opening of Barnados Kidstart Hornby Pasifika Early Learning Centre on Friday.

“Our role is to help encourage cultural knowledge and cultural sensitivity. We value their language and culture but in order to do that we have to value our own cultures first.”

The expertise of its five-person staff – comprised of two Maori, a Tongan, a Fijian Indian and Kairua, a Cook Islander – filled a gap and long-held vision for the area’s growing Pasifika community.

Relocated from the quake-ravaged eastern suburbs, they turned out in force for meetings about the closure of Branston Intermediate School in 2012.

“What fell out of that was that we identified there was no Pacific early childhood centre and yet there was a huge number of us living in the area,” Kairua said.

“There’s always some way of ensuring as Pacific families that we reach for better education. Now we have brothers, sisters, cousins, grandparents working with their grandkids. It’s a gem.”

Moevao said she wanted her sons to interact with their Samoan heritage.

“Its hard for me, being Maori, and my husband being Samoan, to give them that language. The ladies here are so lovely; they know the language and they use the phrases in the right way.”

“He’s half-Samoan, half-Maori and I’ve had lots to do with Maori things but not much Samoan.”

The centre, located next to Hornby Primary School, would provide an easy transition for Joseph and his three younger siblings.

Barnados board chairman James Te Puni said the centre was “a metaphor for our Pacific focus and a reminder that we have much more to do to support Pacific communities to achieve”.

Pasifika participation in early childhood education rose to 92.9 per cent nationally last year, slightly behind the general rate of 96.7 per cent.

Pasifika were the sector’s highest growth market, comprising 63 per cent of enrolment growth in 2013, the last year for which data was available.