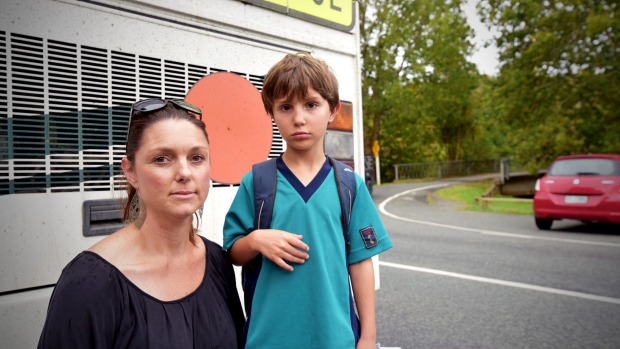 For Cole, and three other pupils from Puhoi, this bus has always been free – but that’s about to change.

The service will now cost $100 per pupil, per term – and parents aren’t happy.

The Ministry of Education provides bus entitlements to pupils living more than 3.2km from their nearest school.

Until recently, pupils were able to transfer their entitlements to attend schools that were further afield.

The ministry has now disallowed this transferral of entitlements, and a $100 fee has been set for pupils who still wish to catch the bus.

As pupils travelling from Puhoi to Warkworth must cross the Ahuroa School entitlement zone, further action is required from Puhoi parents to keep their kids on the bus.

They must either write to the Ahuroa School Board of Trustees for permission to travel through the Ahuroa entitlement zone, or drop the pupils at the boundary on Mahurangi West Rd.

Both options require parents to pay $100 per pupil, per term.

Cole’s mum, Jane, says growth in the area may be to blame, and is frustrated the rules have changed.

“Understandably, things change in life, but these children were enrolled having this service provided for them and, all of a sudden, the rules are changing,” she said.

With another child soon to enrol, Jane will be up for $800 a year in bus fees.

Ministry of Education head of education infrastructure service Kim Shannon says it is “unfortunate” the parent was under the impression free school transport would be provided.

“Children who live in remote areas and attend their closest school may be eligible for assistance from us if there’s no public transport available,” Shannon said.

“Students who aren’t eligible for assistance, such as those not attending their closest school, may be able to make private arrangements with the schools and bus operator involved to use spare capacity on the service.”

The bus, operated by Gubbs, also takes students from Puhoi to Mahurangi College and will keep operating as normal, regardless of affected parents’ decisions.