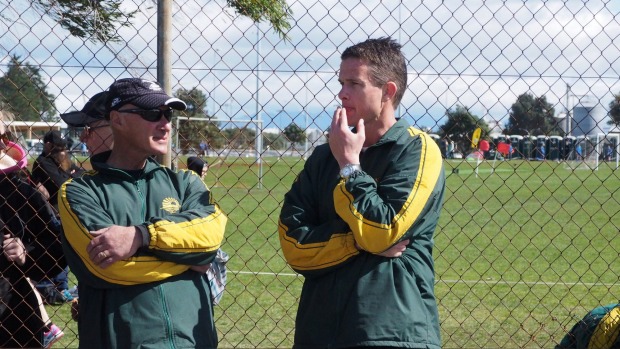 A much-loved teacher has been remembered for helping sports come alive at his school and supporting many students to greatness.

He had first battled Hodgkin’s disease when he was just 18.

He is survived by wife Judy and children Caitlin and Richard.

Murrays Bay Intermediate closed early on Wednesday so Anderson’s funeral could be held at the school hall, as he requested. It was attended by hundreds of mourners.

Anderson worked at Murrays Bay Intermediate for 17 years, first as a teacher, then as sports coordinator, where he really found his niche, principal Colin Dale said.

“His commitment to school and sports was exemplary; night after night, weekend after weekend,” Dale said.

“There are 34 sporting codes at our school and some codes have nearly 30 teams … He loved every one of them.”

Dale also credited Anderson for calmly and professionally dealing with parents, who did not always agree with the teams their children were placed in.

Highlights from Anderson’s career included the school’s on-going success in water polo, sailing and the AIMS Games, plus the establishment of a high-performance sports centre at the school, he said.

Staff member Sandra Jacobs said Anderson was more than a colleague, he was a friend, mentor and inspirational role-model.

“When he took on the co-ordinator role, sports at our school came alive,” Jacobs said.

“He spent many long hours organising, coaching, standing on the sidelines, inspiring our young men and women, many of whom have represented our country or our city.”

Anderson also worked at Blockhouse Bay Intermediate and Bruce McLaren Intermediate. However, he was not just remembered for his professional life.

He was credited for having a good work-life balance, enjoying surfing, stand-up paddleboarding, windsurfing, fishing, golf, cycling, white-water rafting, plus a few beers at the end of the day.

However, friend Kevin Simms said, when asked about his life, Anderson said he was most proud of his wife Jude and his children.