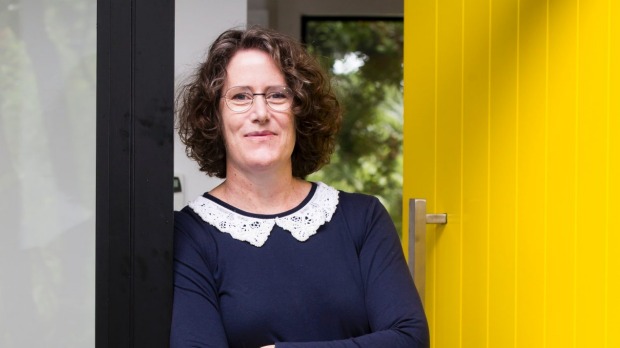 Ensconced in a little writing room on the French Riviera, Kate Camp must be feeling mighty pleased with herself.

It’s week one of a glorious seven months in Menton as this year’s Katherine Mansfield Fellow and whether she’s staring at a blank page or not, it hardly matters. Inspiration will surely come, either from the ghost of KM or the sumptuous surrounds of the Cote d’Azur.

She has digs on the edge of the sleepy coastal town – writers have been expressly forbidden to sleep in Villa Isola Bella, Mansfield’s writing room, ever since one recipient lived there, cooking their meals on a little primus, she laughs.

Speaking from her own home in Wellington’s Vogeltown before heading to the South of France, Camp’s own surrounds are a window into her personality.

She sits beneath a row of seven plates descending the wall, each inscribed with a deadly sin. An ordered bookshelf (“don’t photograph me there, it’s such a cliche!”) takes up an entire wall. A disco light is still in situ from a farewell party the weekend before.

And talk she does. It’s like turning on a tap.

Every now and again she recites a line or two of a poem to emphasise this or that. There’s no end to the contents of verse in her remarkable memory.

Camp, 44, has had a funny relationship with Mansfield.

“It wasn’t till I studied her at university that I really appreciated her writing without the cultural cringe factor.

“As a poet, there are some things I have in common with her in that she was always mining her personal experiences. She’s interested in those ineffable moments where you have a feeling that is exquisitely sad but also joyous. So many of her stories turn on that moment where something beautiful happens that’s also really heartbreaking.”

Exquisiteness, beauty and sadness are all part and parcel of the same thing, she says.

“I’m an atheist but it seems to me utterly incredible that this complex world and our complex lives, in any hour enough things are passing through our consciousness to fill a library.”

Camp’s ideas fill the pages and pages of scrapbooks she has compiled over more than two decades. Whatever she writes down, whether it’s on a Post-it note, a bus ticket or some other scrap piece of paper, it is stuck in rather than transcribed so as to preserve the moment in which it was captured.

She dashes off to her office and returns with several examples for proof.

There is a quiet order to this collection of words.

Slogans, quotes, graffiti, random thoughts, snippets from The New Yorker; she never knows what these ideas are going to become.

“I don’t know why it’s interesting when I hear or see it. It just sets off a funny feeling in my head and I put it in my book. When I sit down on my writing day, I open the book and something will jump out at me and that will be my starting point.”

That starting point comes each Wednesday morning: Her unbreakable date with writing. The luxury of turning that one morning into every day is almost palpable.

Poetry has been part of Camp’s everyday life ever since she can remember.

Her mother, a former teacher, had read poetry to Kate while she was still in the womb and as if by osmosis, it became ingrained in her.

“Mum can and does recite poetry at length and constantly, so whenever you say anything to her it will trigger off some poem in her head. Growing up, if the toilet got blocked it would be ‘bubble bubble, toilet trouble’. It was constant puns and wordplay and quotes from poems woven into our daily life.”

Camp was an attention seeker – she liked blowing party streamers out her nose, she says, demonstrating with a blessedly invisible streamer.

And she read voraciously – she recalls walking to school with her nose in a book, her imagination wrapping around some tale or other.

She was something of an over-achiever, leaving school at 16 for university, where she stalled.

Still reeling from the divorce of her mother and barrister father, she was clearly not ready for campus life. “I was so young. I was totally not ready socially and emotionally.

“I did a lot of stupid things in my teenage years and my 20s. Let’s say I had some pretty serious psychological problems, addiction issues, bad boyfriends, violent relationships.

“I struggled with substance issues and the mental health issues that are caused by that.

“I look back on it now and I think, thanks to the fact I had a very middle class comfortable upbringing, I got not only second chances but 40-50 chances.”

She took some time out and worked as a door-to-door canvasser for Greenpeace. Apart from being bailed up by a rottweiler for a few terrifying hours, it was a great job.

Until she applied to the Creative Writing course at Victoria University in her early 20s, she had never written anything that she expected anyone else to look at, she says.

She’d barely read any contemporary New Zealand poetry. “I remember thinking I’d better get out there and understand what it is that people call poetry these days.”

The Mansfield fellowship comeson the heels of her 2011 Creative New Zealand Berlin Writers’ Residency, and her departure for France earlier this month was just days after the publication of her sixth book of poetry, The Internet of Things.

The much coveted literary fellowship is worth $35,000 these days. The sum has fluctuated. So much so that the Winn-Manson Menton Trust has taken matters into its own hands.

Instead of relying on sponsorship, it joined with the Arts Foundation and raised a capital sum of $800,000 to establish a permanent capital fund to secure the fellowship indefinitely.

It is primarily to enable an established writer to take a new direction in their work and Camp the poet is set to try her hand at prose, perhaps some sort of memoir/essay affair.

She’s well versed in essay writing. Some of it extremely personal traversing infertility and addiction – two themes that loom large in her life.

Menton is her chance to flex a new writing muscle, though poetry might sneak in from time to time.

“There’s no one meeting you at the border making sure you haven’t accidentally written a novel.”

She’s taking time off her job as communications manager at Te Papa for her French sojourn.

And it won’t be all hard graft. She’s already researched the best beaches in the area.

“It’s going to be funny swimming in topless bathing territory.

“I’ll be there in my togs which, to the Europeans, will look like something out of the 1930s. They’ll be thinking ‘Who is this colonial?’”