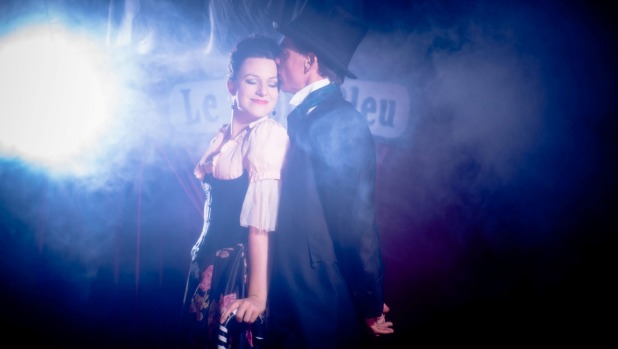 How does someone hammer a nail into their nose, or perform a hypnotic illusion on an entire audience?

In Mr and Mrs Alexander, married performers Lizzie Tollemache and David Ladderman perform stunts, magic and illusions – but they won’t say how.

The show, playing Wellington’s Circa Theatre, is based in 1888 New Zealand and follows a famous husband and wife duo act at their final performance before they disappear.

It features mind reading, sideshows and con-artistry, as well as a finale stunt with an old fashioned metal possum trap.

All the acts are performed live.

“The show is being very deliberately geared towards all lo-fi,” Ladderman says.

“There’s no electronics, there’s no projection … they’re all techniques that were employed all those years ago and I think that’s part of its charm, actually.”

Tollemache says the inspiration came from a lesser-known part of New Zealand history where magic shows, carnivals and sideshows were a huge part of entertainment.

“It’s easy to picture Victorian entertainment as being very boring and conservative but that’s only the upper class Victorian New Zealand,” she says.

“In the music halls for the lower classes, drag was a huge thing. There were filthy songs, these really risque numbers … that was Victorian life as well and that’s the kind of audience Mr and Mrs Alexander would have been playing to.

“So, when we talk about Victorian New Zealand it’s really easy, I think, to get the wrong impression. But it’s comedy and it’s magic acts and it’s amazing things happening right in front of you.”

The couple have been performing the show since 2014, taking it to Canada, Australia, the United Kingdom and all across New Zealand. But this is its first trip to Wellington.

There are three acts in particular, which getting are “massive involuntary reactions” from audiences. They include the possum trap stunt and a moment where the entire audience experiences a mass hypnotic illusion at the same time.

“The best thing is you’ll have people gasping … people will make this noise of shock or awe and then they’ll realise what they’ve done and they’ll laugh at themselves and others will laugh along with them,” Tollemache says.

The couple often get questioned after the show, and have received Facebook messages and emails from audience members weeks later with theories of how they performed stunts and illusions.

“There’s so much negative stuff in the world that getting to give people a really great night where they laugh a lot, see some cool stuff they can’t explain and in the car ride home try and figure out how we did this stuff … it’s just real nice to feel like you’re giving people a positive experience.”

* Mr and Mrs Alexander is showing Tuesday-Saturday at Circa Theatre; 7.30pm. Tickets from circa.co.nz.