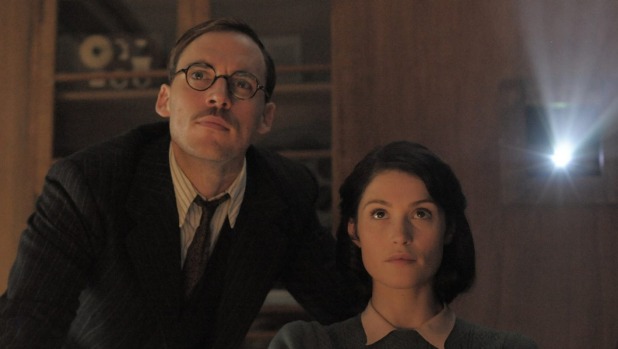 London, 1940. Britain is under siege from German bombers and the government is struggling to keep residents’ spirits up.   “We need more than fat policeman toppling off ladders,” says assistant deputy sub-controller of its film division Roger Swain (Richard E Grant). “We need authenticity with optimism. Bring us a picture to win the war.” Fortunately screenwriter Tom Buckley (Sam Claflin) has an ace up his sleeve – Catrin Cole (Gemma Arterton). Recently arrived from Wales, she has already shown an innate ability for writing “slop” – the ministry’s slang for women’s dialogue. More importantly, she also might have stumbled on the perfect real-life “uplifting” story –  Scottish twins Rose and Lilly Starling and their attempts to help out at Dunkirk.

Unfortunately, the truth isn’t as exciting as it initially promised and with Catrin being pressured to decamp back to the valleys by her brutalist-artist husband Ellis (Jack Huston) and the blitz hitting closer and closer to home, there’s a danger the project might never see the light of day.

﻿READ MORE: * Hate Blockbusters? Here’s seven movies to get excited about this Autumn* Me Before You and the stories we need to tell about people with disabilities* Bewitched by beauty: Gemma Arterton ﻿

Based on Lissa Evans’ 2009 novel Their Finest Hour and a Half, Danish director Lone Scherfig (An Education) once again proves a master of creating a sense of space and place. Here, wartime Britain is lovingly brought to life in all its stiff upper lip and danger-every-night glory.

This is a film that skilfully manages to juxtapose broad humour with bleak drama, as our “heroes” attempt to use their typewriters and acting skills to lift a nation. Filled with memorable moments and one-liners (screenwriter Gaby Chiappe’s previous credits include the much-admired Lark Rise to Candleford TV series), as well as more than a couple of surprising twists and turns, Their Finest lives up to its name thanks largely to a fabulous cast and a director at the top of her game.

Arterton (Gemma Bovery) shows why she is quickly becoming one of the finest British actress’ of her generation, while Claflin exudes the same cool, smouldering cynicism that won him so many admirers in last year’s weepie du jour Me Before You. Supporting them are a scene-stealing Bill Nighy (Love Actually) as an aging actor, Eddie Marzan (Still Life) as his long-suffering agent, Jeremy Irons (Margin Call) as the pompous Secretary of War and Jake Lacy (Carol) as the mixed-nationality RAF pilot brought into the production to appeal to American audiences.

At once a celebration of filmmaking, a interesting look at Anglo-American relations and a exhortation that  “when life is precious, it is an awful shame to waste it”, Their Finest is two-hours well spent in the company of some entertaining and engaging characters.