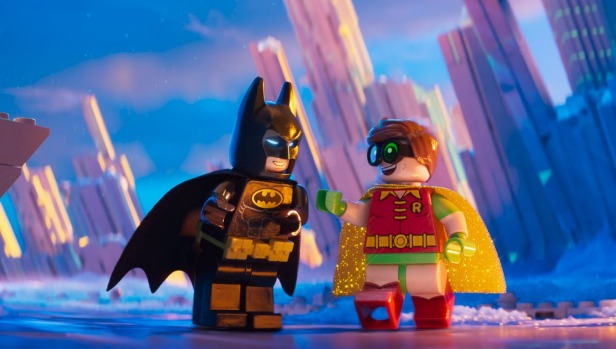 While I’ve been playing with Lego for nearly four decades (I still have all my childhood blocks), my affection for the first Lego Movie only lasted half of the film. But it’s not about me – in the main, audiences loved the witty combination of those tiny blocks and swivelling heads with an action story laden with feminine sass and CGI explosions. And that’s all it takes to warrant a follow-up – so, some chancer (actually, five writers) dreamed up The Lego Batman Movie. Cynically, one could say that combining the DC comic franchise with the best children’s toy ever created is part-great idea, part-exploitation of parental coffers. But it’s also an opportunity for combining in-jokes from two very disparate providers of youthful happiness – and this is one aspect the latest film does well. Batman is living an ostensibly happy existence in Gotham City, beloved of the people who appreciate his crime-fighting assistance and assume he lives an exciting after-hours life of parties with professional tennis players. Little do they know, Batman/Bruce Wayne is, in fact, still the lonely child whose parents were murdered in front of his eyes all those decades ago. Were it not for his faithful butler, Alfred (voiced by Ralph Fiennes, it’s the best thing in the movie), BatWayne (played by Will Arnett, whose cameo in the first Lego Movie caused a sufficient stir to prompt this spin-off) would be completely alone.

As usual, the plot descends into an action-based farce of good fighting evil, but the clever twists in this plot make much of the fact that it’s the Joker who values his “relationship” as Batman’s sworn enemy, whereas Batman – the perennial loner and commitment phobe – refutes this, saying “I don’t have a bad guy – I’m fighting a few at the moment”. The Joker’s dreams of monogamous infamy dashed, he enlists all the baddies in the history of fictional-everything to rain terror on Gotham and force Batman’s hand.

The break-up is, I’ll admit, a very funny premise – and seeing a merry band of baddies which includes LOTR’s Sauron, the Daleks and even Voldemort himself (who is for some reason voiced by Eddie Izzard – a missed opportunity to get Fiennes to do twice the work for half the pay and double the in-jokes) delivers at least one guffaw.

But somehow the writing sends everything else into lacklustre territory. Wayne gets inveigled into adopting a child who is set up to become the “Robin” of his future adventures – but their dialogue doesn’t zing like it could, and many of the verbal and visual jokes fall flat. (Say what you like about audiences who aren’t comprised of Just Me – mine was decidedly quiet throughout this screening.) Zach Galifianakis is solid as the Joker, but you’d be forgiven for not realising it is him, such is the scripted limit placed on the comedian’s capacity for hilarity.

As usual, there is some nifty photography and the live action stop-motion of the Lego figurines is way cuter than the computerised scenes. But the message (hammered home, by necessity, due to its wide-ranging audience) that you shouldn’t put work ahead of relationships and family, is a good one, even if the rest of the story’s madcap silliness rather detracts from it.

Who knows what viewers will take away from this latest Lego Movie, but if I hadn’t written notes, I wouldn’t consider it memorable. Perhaps I’m better off pulling that box out from under my bed and going back to the source material.