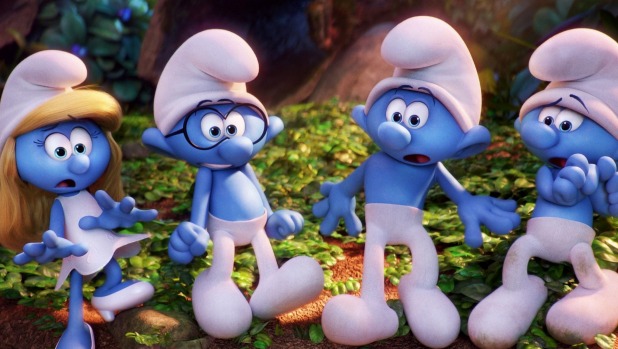 Smurfette (Demi Lovato) is tired of being “the only girl in the village”. While everyone else has a purpose reflected by their moniker, she isn’t known for having a particular skill or trade.

Worse still, there are some who still can’t get over her questionable origins and connection to the Smurfs’ arch-enemy Gargamel (Rainn Wilson).

However, just as she’s beginning to feel all alone in the world, Smurfette spies what appears to be an unknown Smurf, who then proceeds to drop their hat in terror.  But before she can investigate further, Smurfette is captured by Gargamel’s vulture.

Seizing the hat, the evil wizard divines that it has come from another Smurf village, deep in the Forbidden Forest. Can Smurfette get to them first to warn them of the danger Gargamel poses?

The first all-animated Smurfs movie since 1983’s Smurfs and the Magic Flute, director Kelly Asbury’s film owes a far bigger debt to more recent, similarly themed tales like Trolls, Angry Birds and his own Gnomeo & Juliet. Like those adventures, this boasts a tween-potent combination of brightly coloured visuals, toe-tapping tunes, empowered female protagonists and no shortage of sass.  The Lost Village’s plot will also seem more than a little familiar to fans (and parents of fans) Disney’s Tinkerbell adventures, with its introduction of mirror image characters, while adults may wonder at some of the more “hallucinogenic visuals” and a Star Trek-style climax.

And if it seems a little strange to be rebooting the little blue Belgian creations just six years after the were resurrected for a live-action series – just remember this is the same company that is about to bring us the third different version of Spider-Man in 15 years.