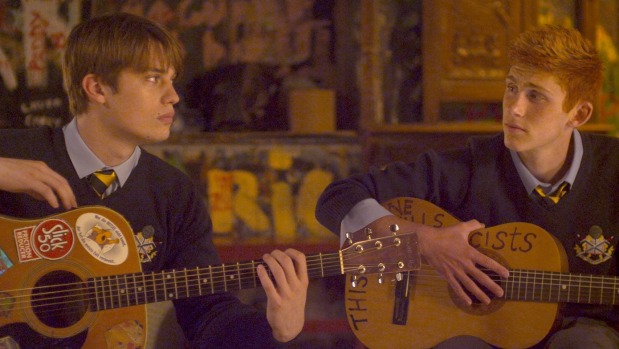 For Ned Roche (Fionn O’Shea), persecution is a daily ritual he must endure at Woodhill College.

In a place where rugby is a religion, he prefers to remain agnostic – more interested in language and music than line-outs and mauls.  With it being a stance some other boys can’t stand, it comes as something of a relief that the new year begins with Ned assigned a room of his own.  That is until the late arrival of transferee Conor Masters (Nicholas Galitzine).

To Ned’s further dismay, he’s touted as the College 1st XV’s great hope – a first-five who could tackle and kick the College to unprecedented glory.  Trying to literally wall himself off from the influence of this interloper, Ned believes fast-tracking his self-expulsion plan is his only hope of retaining his sanity.

However, that’s before he gets to know his roomie – discovering a shared love of culture and uncovering a secret about him that could send shockwaves through the rugby team’s dressing room and perhaps even alter the whole culture of the school.

Irish writer-director John Butler’s partly-inspired-by-his-own-childhood drama is a charming and charismatic coming-of-age story that’s part Dead Poets Society, part Sing Street. Subtle, but solidly put together, it’s a rare “mainstreamed” queer tale that doesn’t end in disaster, treat all its gay characters as underdogs or tread a ploddingly predictable path.  Think last year’s Aussie based-on-fact tale Holding the Man, but without the tragedy. Sure it’s not all sweetness and light, but there are empowering characters – both teen and adult, to inspire and/or identify with.

That they have such power is down to two terrific performances in particular. Galitzine, due to next be seen on our screens later this year in the Christchurch-shot The Changeover, is a revelation as the “sensitive” sporting hero, while Andrew Scott (The BBC Sherlock‘s Moriarty) is simply superb as the boys’ effusive and understanding English teacher Dan Sherry.

Perhaps unsurprisingly, some of the supporting characters are a little one-dimensional, but one of the most pleasing aspects for rugby fans is the onfield action. Butler brought in Irish legend Brian O’Driscoll to choreograph proceedings and it shows – there’s a real authenticity to the scenes – something you can’t say about many cinematic depictions of our “national game”.